As promised in Friday's post, here is a little follow up of the sewing I did over the weekend! It was the perfect weekend to craft and enjoy the sounds of the rainstorms. I made a quick stop at Joann's on Saturday morning, and picked up some fabric, zippers, and thread for the pillow covers. I'm glad I took my time at the store--I had initially ended up at the cut counter with something I wasn't thrilled about but after some additional wanderings with my sham pillowcase in hand, I found exactly what I needed including a great match in the remnants bin! If I am trying to match something we already have, I do my best to bring the original item along.

The rain began as soon as I got home, so I settled in for the afternoon. 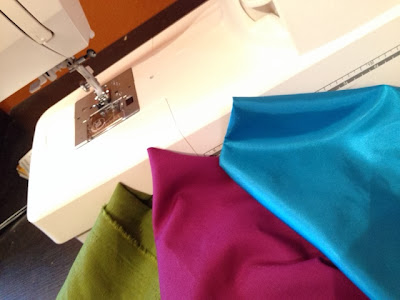 I started with the knot pillow that served as my inspiration for this project. I made the knotted panel first, installed the zipper, and then finished off the rest of the pillow case. 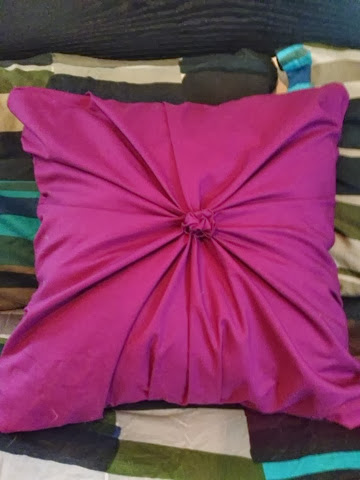 Considering this was my first-ever zipper installation, I'd say things went really well! :) 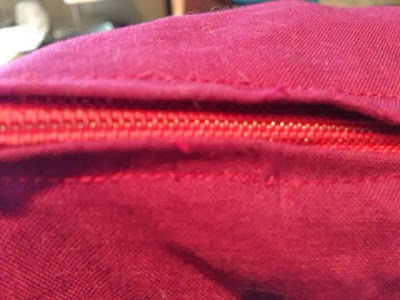 Next up was my army green pillow--this wasn't in my original plan that I rendered on Friday, but I liked the look of this fabric with the others when I was picking things out. I created the texture on the front panel by sewing on thin strips of the fabric, folding and twisting them as I went. It was pretty random and I didn't have a set plan of what the design would look like. 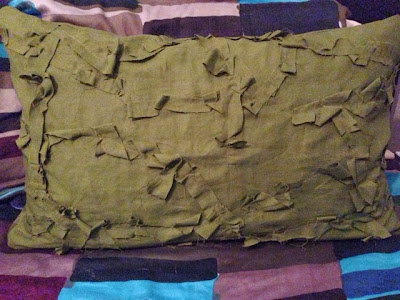 I stumbled across a tutorial for a ruffled pillow when I was doing research on the idea I used for my green pillow. I had initially thought to cover the long pillow this way, but I couldn't find the right silky blue fabric. Luckily, I passed by the remnants bin and found a one yard hunk of the exact blue I had been looking for! I decided to take apart the cover on the gray pillow we already had, and create the ruffled cover. This pillow was the most time consuming (ironic, as it is the smallest) because of all the strips that needed to be cut, heat finished (aka burning the edges with a candle so they wouldn't fray), sewn on. In the end, however, I think it turned out to be my favorite pillow :)
Here is the finished product! I love the pops of color and texture. They definitely bring a new feeling to the room. I think things are much more cheerful! 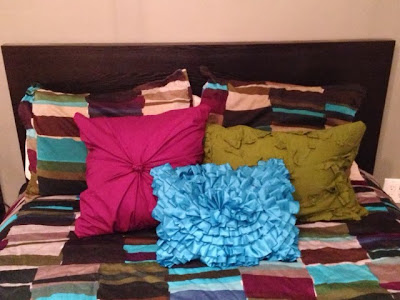 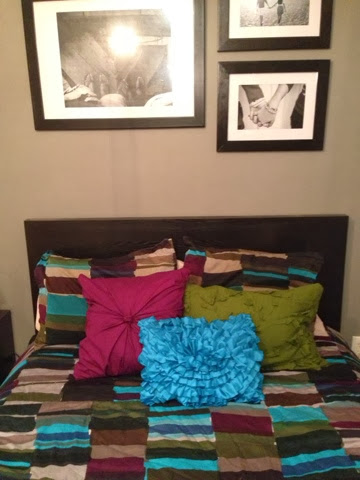 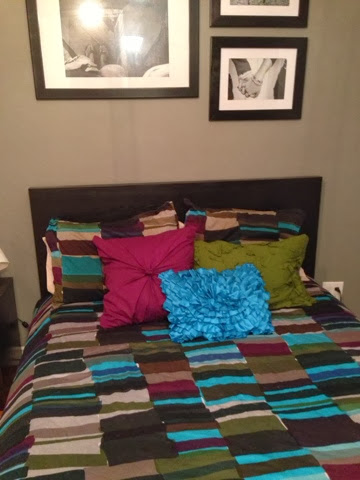 The best part of this project (aside from self satisfaction) was that it was relatively inexpensive. The two large pillows cost a total of $11 at IKEA and the fabric/zippers/thread came out to about $20. I don't think I could by one nice throw pillow for less than $15, let alone three for $30! Just for kicks, I looked up ruffle pillows at Pier 1--this one and this one both come with a price tag higher than my fabric costs! That's a win in my book any day :)

How was your weekend? Any fun projects completed?
--E&R