On Saturday morning, we were up early again and decided to head down to the beach to reserve our lounger for the afternoon. We had noticed that the prime seats by the pool get saved pretty early in the morning, and we wanted to make sure we didn't miss out! 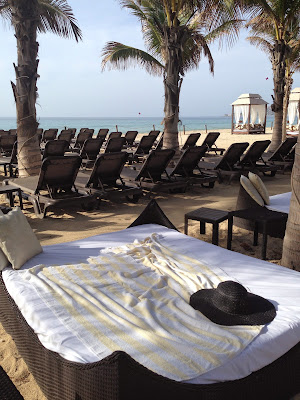 We stopped in the international buffet for breakfast again, and enjoyed some fresh fruit and breakfast potatoes. We had a little bit of time before our dolphin excursion, so we got changed and watched a bit of tv before heading down to our van pick up. 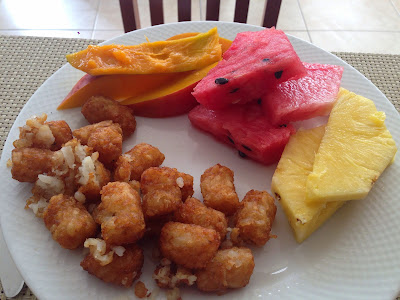 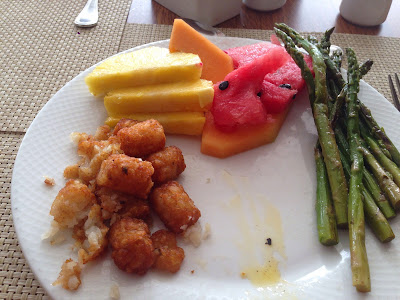 Over the summer, when we first started planning our Cabo vacation, we decided that a trip to swim with dolphins was a must. In true Barclay style, Rick did a lot of research about which companies offered the best conditions for the dolphins and had the best value. We settled on Dolphin Discovery for a number of reasons--they offer round trip transportation to their facility, the dolphins aren't in a tank but rather a sectioned off part of the ocean harbor, and there was a 50% off discount for one person if we booked two tickets. Another big plus is that Dolphin Discovery is the only dolphin program in the area that has successfully bred two baby dolphins! We opted for the Royal Swim package because if you are going to swim with dolphins, you might as well go all out!

The van picked us up from our hotel and took us over to the marina, maybe three or four miles from our hotel. The facility is just a short walk from the water where the dolphins are, and we checked in and got out life vests. 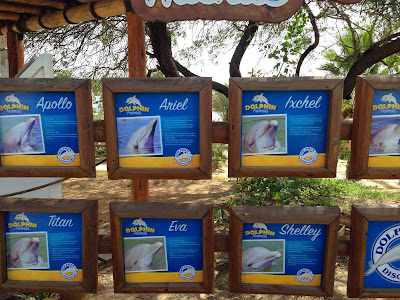 Participants are not allowed to bring cameras in to the water with them during the dolphin swim--this seems like a pretty standard practice across the board, as the companies sell photos they take of you and jack up the prices. For us, $50 for three pictures of one person wasn't worth it! Sorry we don't have any photo illustration of our afternoon!

In addition to us, there was one other couple participating in the Royal Swim. We were lucky enough to have two dolphins for the four of us, Ixchel and Ariel. Both were beautiful, and huge :) We got to pet them, and they felt much different than I would have expected. Velvety, almost. As a part of our adventure, we were pulled by the dolphins while holding on to their dorsal fins, had our feet pushed by their noses and were lifted out of the water like we were water skiing (twice!), and got to give them hugs and kisses. It was fun to watch them interact with their trainer and each other, and we were both reminded of dogs performing tricks for treats.

We had the chance to sit in an ocean kayak and have them jump over our paddle, and by this point, all of the other people who had been on the dolphin adventure were on their way back to the main building. The woman who had been working with us all afternoon then turned to us and asked if we would like to help with their training of the baby dolphins.....ummmmmm OF COURSE! The babies were learning how to do dorsal pulls and push people holding on to a kickboard. The other woman and I were going to do the kickboard, while Rick and the man got to help practice the dorsal pull.  Well, this other lady had trouble getting on the kickboard, so I got to be pushed by the babies 3 times! So so cool. We definitely had a blast!


After the dolphin adventure, we headed back to the Hyatt for some lunch and relaxation. We hit up El Mexicano again for their fantastic buffet. 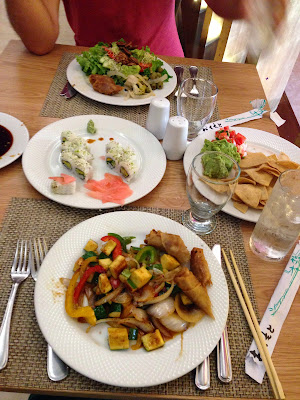 After a relaxing afternoon by the pool, reading, sunbathing, and swimming, we got ready for our "anniversary" dinner. We had let the Hyatt know that this was our big, celebratory trip, and they were so kind in helping us celebrate. Since this was our big dinner, we decided to get dressed up. 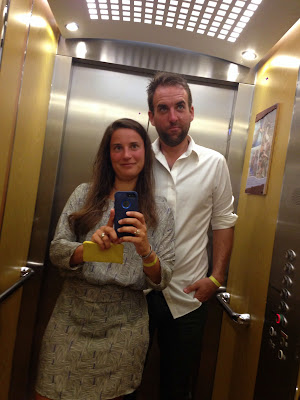 We made reservations at El Cortijo, the Spanish restaurant on the property. We were a little nervous about the vegan options available, but our server, Julieta, and the floor manager made us feel so welcome and comfortable.

We started with the gazpacho, which was outstanding. Fresh and delicious! Makes me want to make it at home! Then, we had a veggie risotto with potato and Juileta insisted on bringing us dessert, Yes, it was only canned peaches, but it's the sentiment that counts! :) 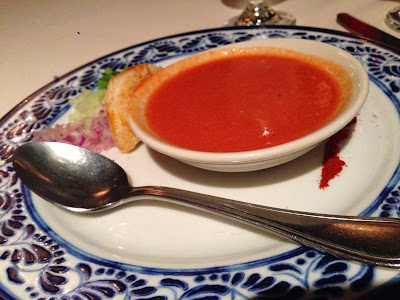 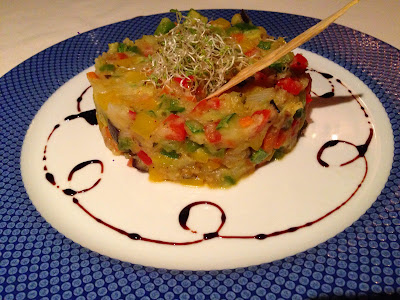 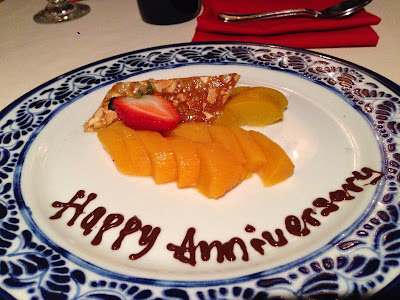 We had planned to take it easy at El Cortijo, as we wanted to go back to Lotus to grab some more sushi and miso soup! It was a delicious second dinner :) 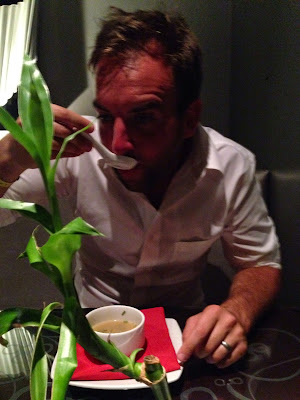 To end the evening, we decided to relax outside on one of the cuddler lounges. Rick caught the end of the Cardinals game (thanks, wifi!) and then it was time for bed.
When we got upstairs, we were surprised to find a little towel art and another bottle of champagne and dessert waiting for us! Talk about being spoiled! 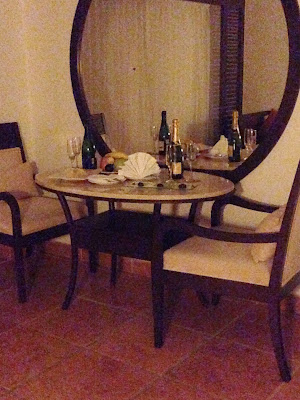