Rick and I woke up early on Sunday morning, in order to have time to get some breakfast before catching the Narita Express back to the airport. The weather was completely oppposite of the day before, sun shining and the air crisp aand clear. We loved walking through the city on the way to Tokyo Station--guess we showed up one day too early! 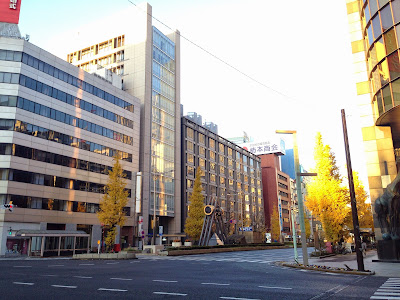 Mr. T's TanTan opened up at 7am, so of course we stopped in for another round of ramen before catching our train. We wandered around the station, looking at all the shops and food stalls, using up our time before the train. 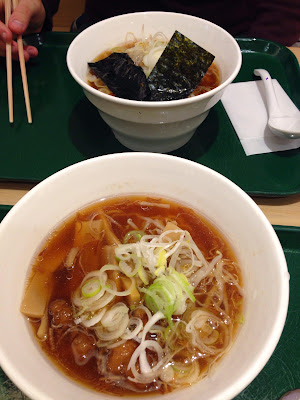 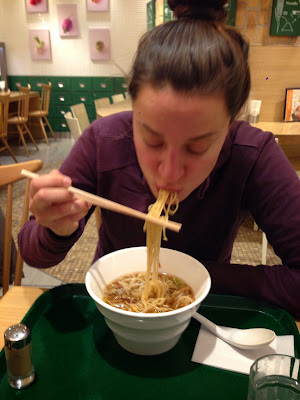 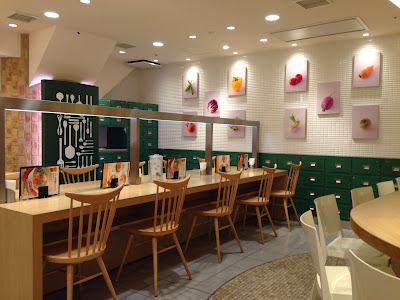 Once we got to Narita, we picked up our bags and went to check in for our flights. We were on Asiana Airlines for our final two flights, which is a company based out of Korea. In Narita, check in broken up by fare class, not airline. So United, for example, would have a desk in each section--Economy, Business, and First. 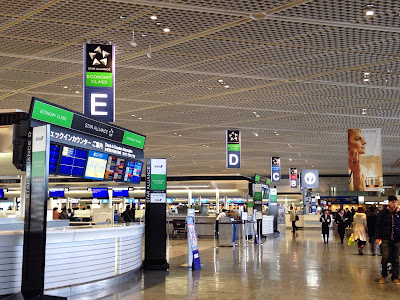 Once we checked in, we shopped around a bit before going through security. We had a few yen coins left over, which couldn't be changed into other currency, so we picked up a pair of socks for Rick and apple juice. Only 3 one yen coins left--pretty smart spending if you ask me!

After security, we headedo the United Club for some snacks and wifi. Rick was enthralled by the beer dispensers, which tilted your glass and poured the perfect amount of beer into your glass. 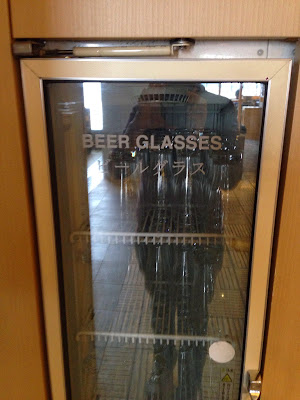 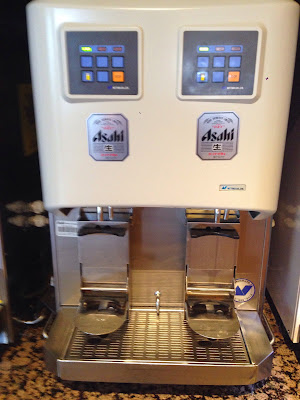 Our first Asiana flight was a double decker plane--we had booked tickets on the top deck, but soon realized because our seats weren't together, the gate agent bumped us from business class to first on the bottom level, so we could sit together......oh darn..... :) 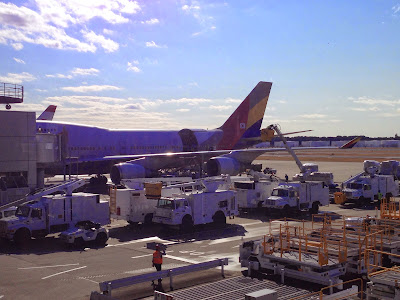 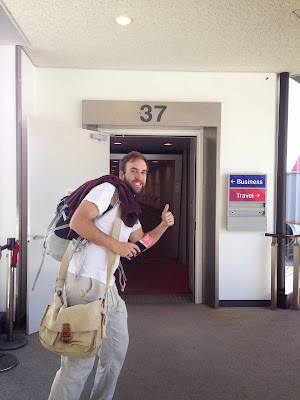 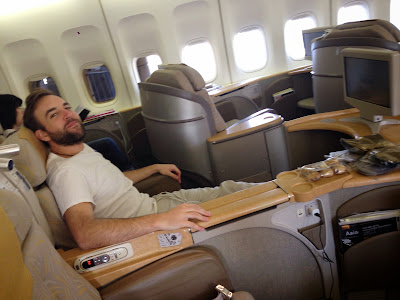 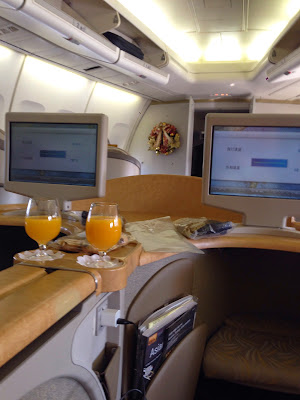 We enjoyed another great meal, some movies, and lay flat seats, and before we knew it, we had landed at Incheon. 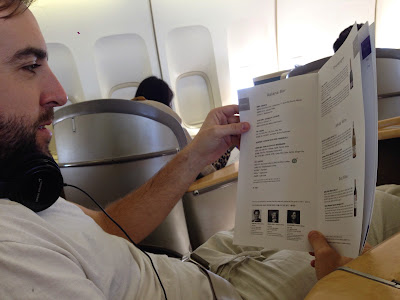 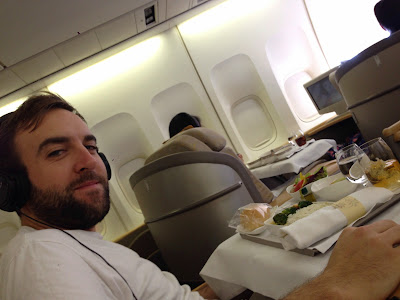 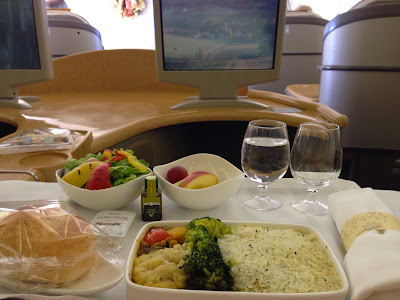 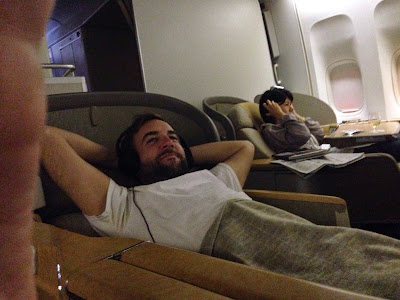 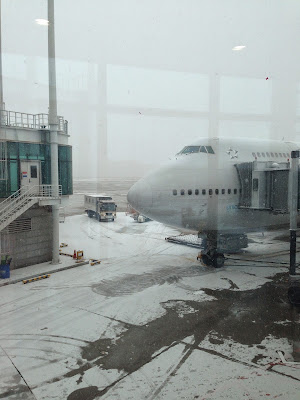 We had about 2 and a half hours before our last flight, so we headed up to the Asiana Business Class lounge. In addition to a full salad bar, snacks, and a great view, we were there in time to take advantage of dinner service, too--well, Rick did. I was napping! 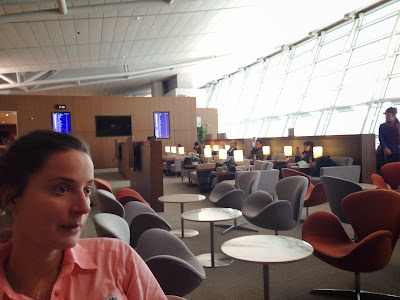 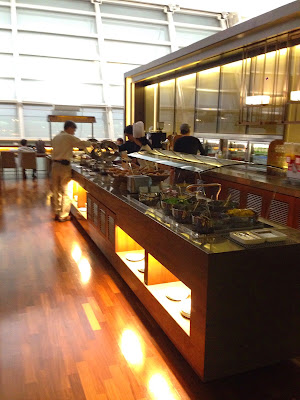 Our final flight was 5 hours to Bangkok. We were in business class again, and after some rearranging of seats, were able to sit together in the middle of the plane. 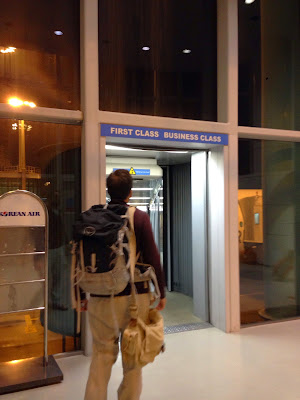 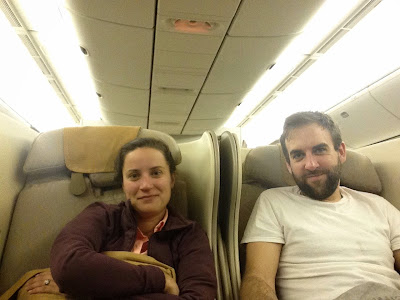 The food service on this flight was the most impressive of all. We had an appetizer course of veggies, a main curry entree, fruit course, and finally dessert, which was fruit for us and ice cream for the non-vegans on the flight. Seriously amazing--and the port was tasty, too! 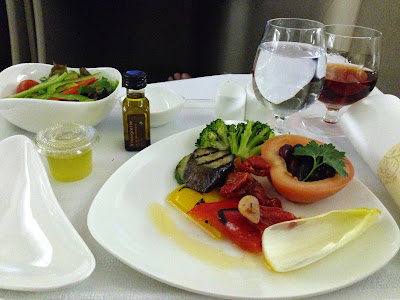 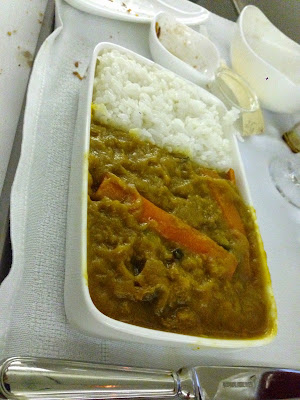 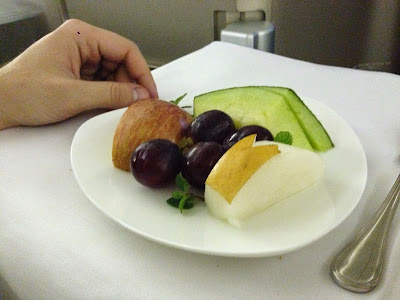 Once we landed in Bangkok, we got on the train into the city to head to our hotel. After the train, we decided to get in a taxi instead of dealing with more trains--our driver was a bit shady and tried to over chargesus by not running the meter, but playing the innocent lady tourist card got us the actual fare instead of the inflated one :) 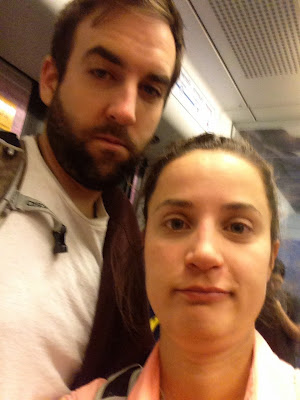 Rick booked us 5 nights at the Plaza Athenee (perfect, right Kappas?) using a rewards program through SPG, which means we are staying for free! We even received a room upgrade. 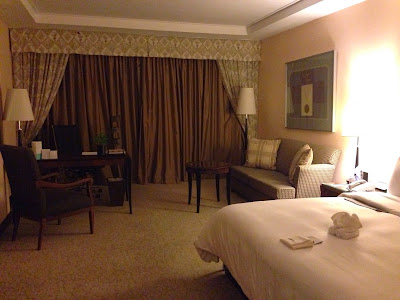