Saturday morning came particularly early for us. Seeing the sun rise over Angkor Wat is one of the "must-do" activities when visiting Siem Reap, so we were up at 4:30, ready to meet our driver, Mr. Kim, at 5am. He was ready and waiting for us, with a cooler of water (standard procedure for a day tuk tuk hire) and we were off to Angkor.

I was very grateful we had bought our passes early--the ticket gates open at 5am, but the park doesn't officially open until 5:30. The queue was already very deep when we were arriving, but we got to drive right past by showing our tickets.

It was fascinating to see the crowds going in to the main temple area. Most groups had flashlights, and there were so many stars in the sky. The standard spot to watch the sun rise is off to the left of the temple, where the reflection of the temple and sky is reflected in a small lake. Because Mr. Kim insisted we meet at 5 and we had pre-bought tickets, we were able to find spots to stand just at the edge of the lake--right behind the front row of people, who were sitting on the edge of the water. Perfect, unobstructed view. 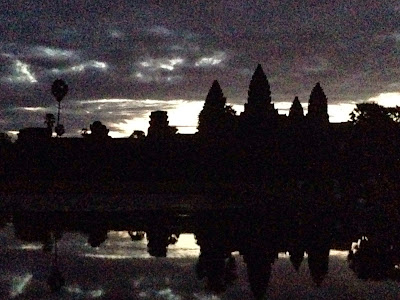 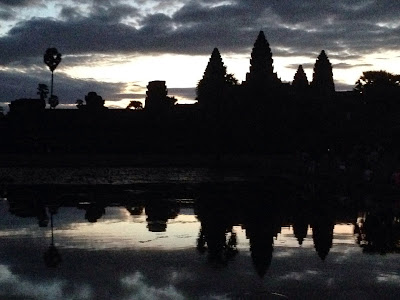 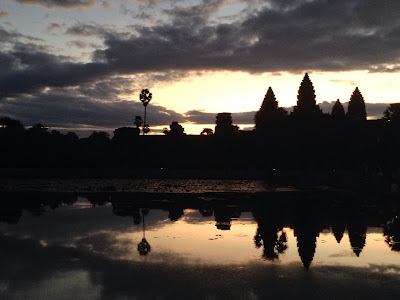 We got some great shots as the sun came up and I had a good chuckle to myself as people tried to use a flash when taking their photos (not helpful in the least). It was only when the sun was all the way up that I realized how deep the crowd was--literally hundreds and hundreds of people. We lucked out with our spot--it was easily as good as the spots staked out by professional photographers. 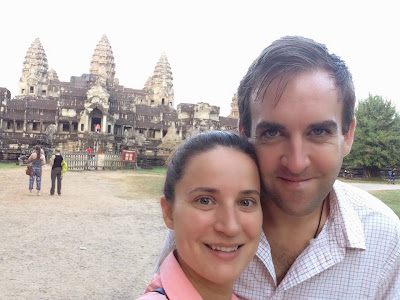 After Angkor Wat, we went on to explore a number of other temples. We had some idea of the places we wanted to see, but used Mr. Kim's expertise on which would be less crowded. We saw Ta Prohm, Bayon, Baphuon, and Preah Kahn, with others along the way. 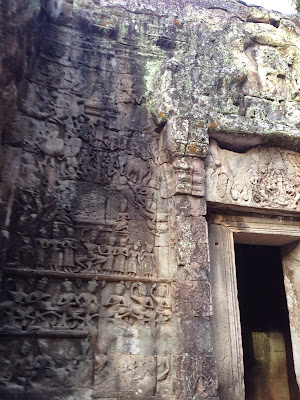 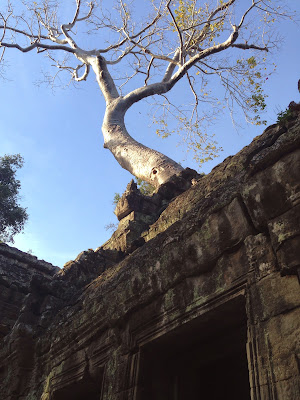 Many of the temples have been invaded by the jungle. Plenty of the ruins have enormous banyan trees growing right out of the stone. 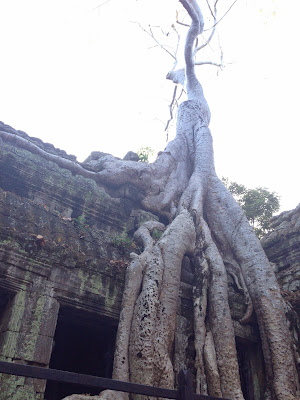 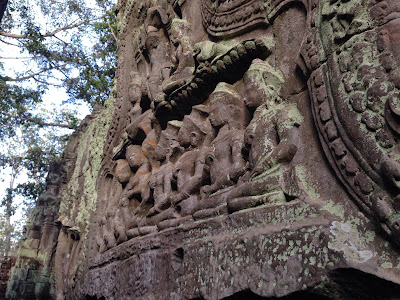 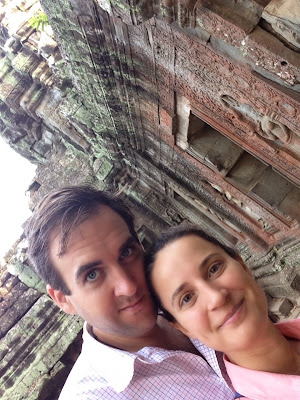 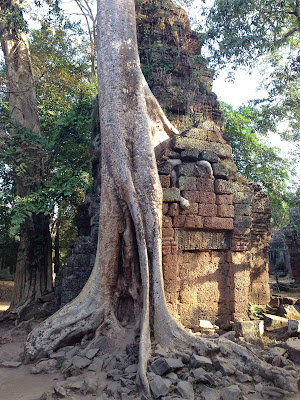 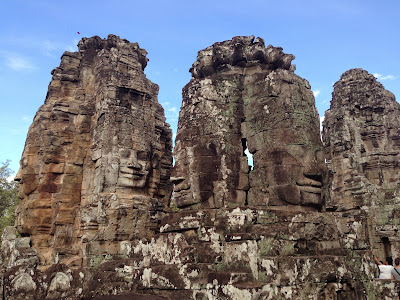 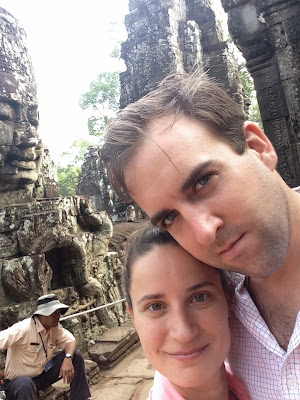 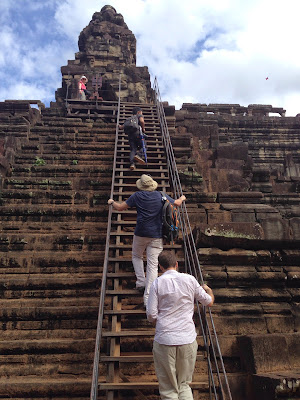 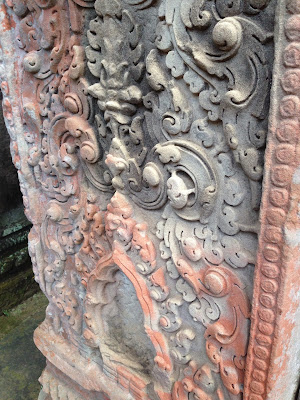 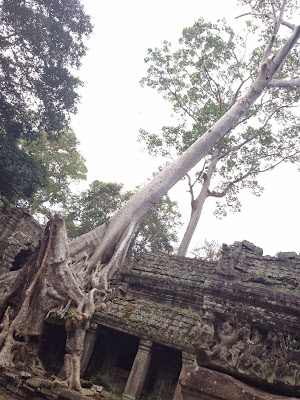 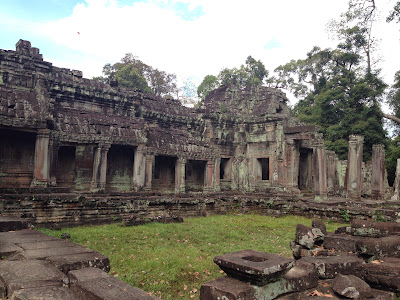 We headed back to the hotel around 11:45am. It felt like a full day already, since we had gotten up so early and had spent the better part of 7 hours hiking around the ruins. A shower, some internet noodling, and a nap.

Around 4:45, we grabbed another tuk tuk into downtown Siem Reap. We were hoping to go to a restaurant called Peace Cafe for dinner, but they had closed for a private event at 5. So, we found our way to another veg stop with good reviews, Chamkar. We were hoping to try some unique local cuisine and weren't disappointed. 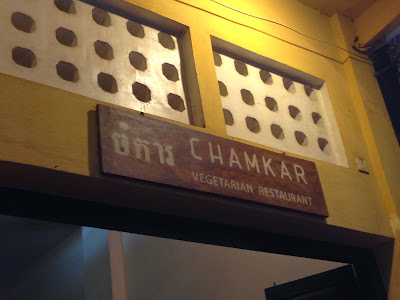 After dinner, we decided to stop for massages--after being spoiled in Thailand, they left a lot to be desired. But, at $5 a pop, who can really complain? 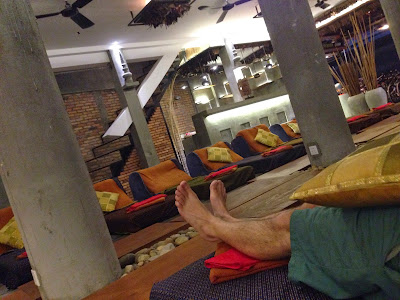 We wandered some more of the night market stands, and stopped for 50 cent beers. Again, not great, but at that price, who can complain?! 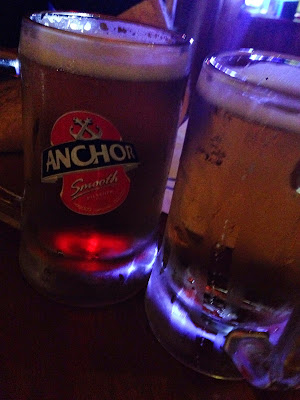 Our last stop of the evening was The Purple Mangosteen, a small bar offering 2 for 1 happy hour drink specials that had Pimms on the menu--and you know we are suckers for a good Pimms cup! We also ordered a spring roll, but it arrived with some suspicious looking contents (either chicken or shrimp) so we didn't eat it. 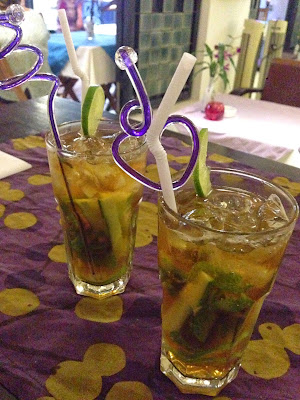 Another walk down Pub Street to finish the night. 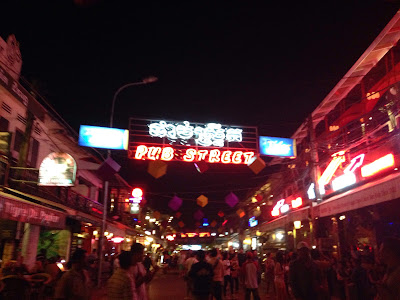