For the past month or so, Rick and I have been making a point to have "date night" more often. Yes, it sounds silly, because we got out to eat together all the time, but there's something different about setting aside time to enjoy each other's company. We've been making an effort to try new restaurants on said date nights, and this weekend, we visited Mohawk Bend in Echo Park. 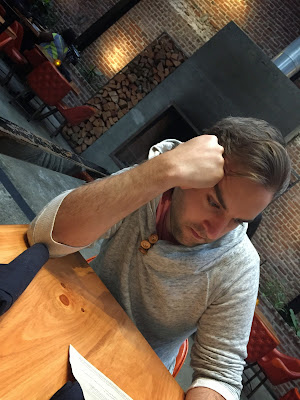 We've been to Mohawk Bend before with friends, after eating at Sage. Mohawk Bend has a fun drink menu, with cocktails like the Thai Town Mule (kaffir lime vodka, fresh limes, lime juice, ginger beer, and lemongrass) and the Garden Salad (vodka, lemon juice, lime juice, fennel, cilantro, cucumber, thyme, and ginger beer), but this was the first time we were really focused on the food.

Mohawk Bend's menu is comprised of all vegan items, unless otherwise noted, Many of the items can be made vegan or non-vegan, which is a great option, too! We ordered a few starters and a pizza to share.

First up--Buffalo-Style Cauliflower with vegan bleu cheese dressing and celery. These are very similar to the cauliflower wings we make--there are ton of people in the LA vegan community who rave about these being the best buffalo wings around, so we were curious to see how they would be. They are battered and fried, with a buffalo sauce coating, and plated on top of the bleu cheese dressing. 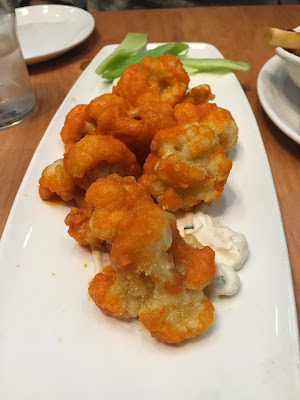 While the flavors were all there, the buffalo sauce was not evenly distributed between bites, which bothered me a bit. I can always use more sauce. Rick and I both noticed that some pieces were cooked more thoroughly than others, while some were still crunchy. Overall, I think I'd grade these a B+. Easily fixable, just consistency and execution issues more than anything!

Our second appetizer was Arancini. I've always been a fan of Sage's buffalo arancini, and was excited to try a "normal" version of this classic Italian dish. The balls are made of rice, English peas, vegan sausage, and cashew cheese. They are lightly breaded (I think with panko) are fried, then served with marinara and fresh basil. 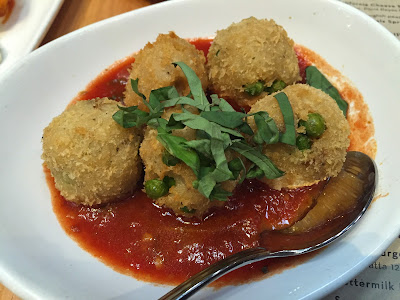 These reminded me so much of mozzarella sticks! The flavors were complex and creamy, and the marinara was the perfect accompaniment. Rick didn't notice the vegan sausage, but I thought it was great--not too overpowering. Definitely an A, and our favorite dish of the night!

Next we tried the Chili Cheese Fries. These bad boys are piled high with vegan chili, guac, cashew cheese, and pic de gallo. 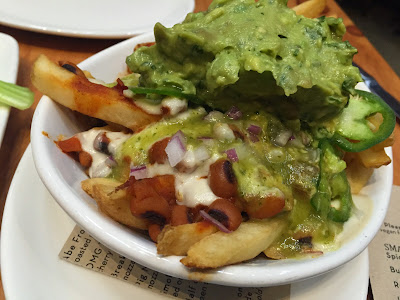 Another delicious choice, though not our favorite. The flavors are not quite as bold as the arancini, so these come in at an A-.

Our entree was the Pesto Pizza. Of course Rick quickly gravitated to this one, topped with basil pesto, toasted walnuts, artichoke hearts, and vegan potato goat cheese. 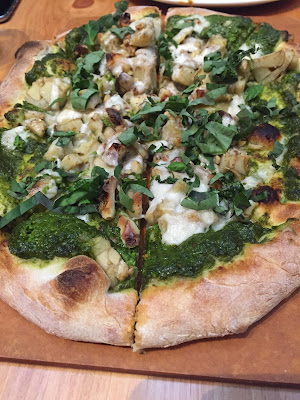 Surprisingly, this was the dish we were most disappointed in. The walnuts were a little weird, since they were soft, and Rick felt the whole thing was a little dry. If we were eating it at home, we'd definitely add a drizzle of olive oil. Solid B status--not terrible, not outstanding.

So, the main reason why anyone would want to go to Mohawk Bend? The vegan s'mores. We've had them once before, and have really been looking forward to having them again...................and then they were out :( womp womp!

We opted for the Sunset Sundae, which is a brownie a la mode with chocolate sauce--I wish there had been another gelato flavor available because although the strawberry was delicious, it just wasn't quite right. 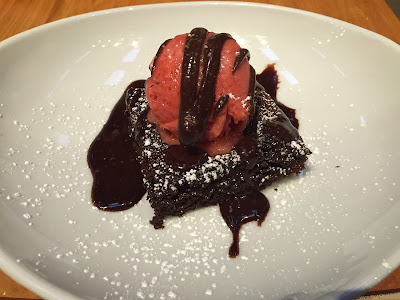 For the sweet ending to our meal, it was pretty good, though not quite the satisfaction of the s'mores we had hoped for!

Overall, I think we'd both say that this meal was just okay--we had high hopes, and weren't really blown away by the options we chose. However, that doesn't mean we won't be back! The cocktails are just too good to stay away :)