We were up early Wednesday morning to head to Amsterdam. Shout out to the Helsinki airport for their efficiency and ingenuity--we tagged our own bags, scanned them in, and avoided traveling families with the addition of a "Kids Gate" at security. Smart, smart, smart!

The flight went by quickly (I slept the whole way), and we hopped on the train to Amsterdam Centraal station. From there, we walked to our hotel, taking in some of the sights as we dragged our bags along the narrow streets.

We stayed at the Intercontinental Amsterdam, which is a pretty posh spot. Lots of celebrities stay here when in the city. 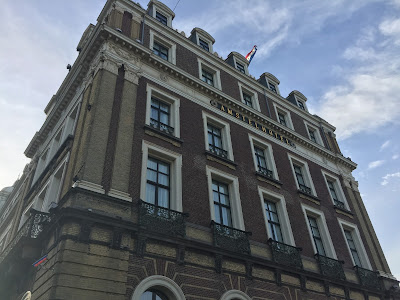 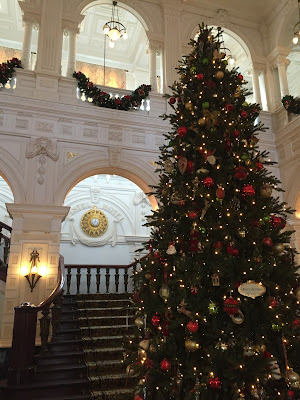 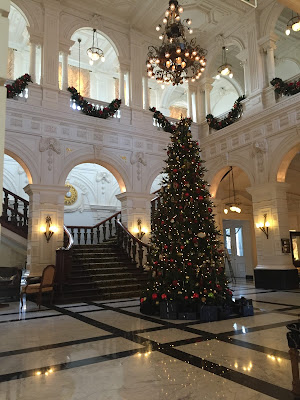 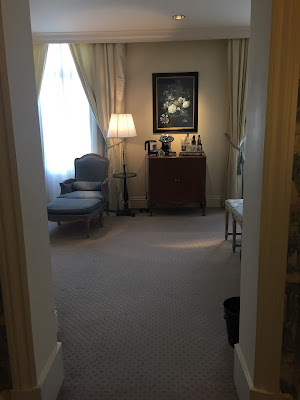 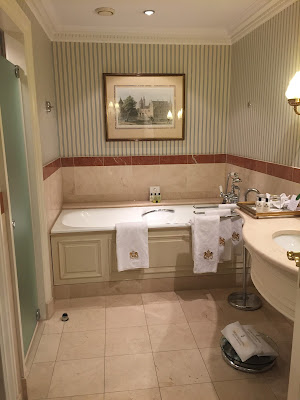 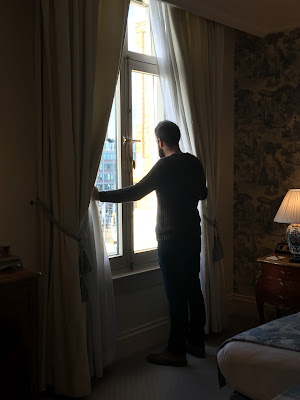 We decided to grab a snack and check out the free walking tour of Amsterdam. It was fun to see even more of the city, as we headed to Dam Square. 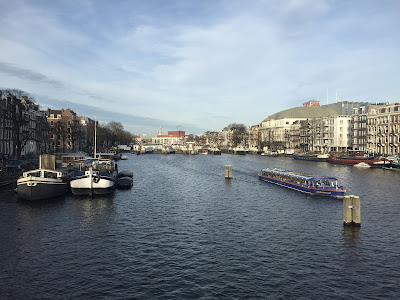 One of the things that I absolutely wanted to was have fries in Amsterdam--specifically, "war fries" or Oorlog fries! I listen to Dinner Party Download fairly often, and had first heard about the fries on the show. The fries have peanut satay sauce and mayo, with onions. Sounds crazy, but so delicious! We stopped at Mannekin Pis, one of the most famous fry stands in the city. 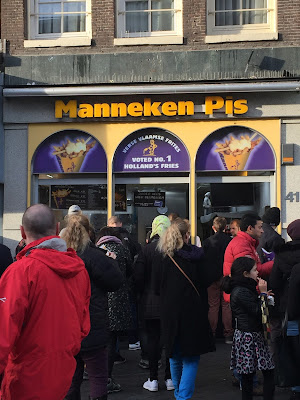 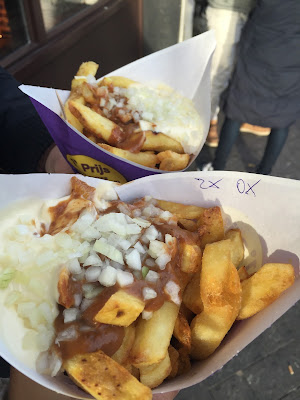 While we were waiting around for the free tour to begin, a man and some kids came up offering free art--they are trying to spread the message of love and peace around the world, and I told them I would be happy to put this up in my classroom! Our kiddos will love it. You can check out the artist on Facebook. We were initially nervous, figuring he was trying to sell us something, but it was fun to see how genuinely excited the kids were to give out their art! 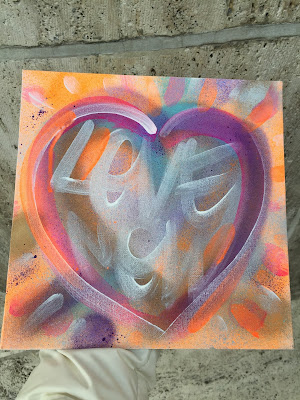 Guys. If you've never done a free walking tour in a new city (or even your own city), I cannot recommend it more highly. In addition to being a great way to get your bearings, they are always a great crash course in the history of the place you are visiting. We went on one in Copenhagen (and saw the Kubitsky clan!), and the tour in Amsterdam was the first thing on our to-do list.

The tours are great because you decide what they are worth--and accordingly, the guides work really hard to make sure you have a great time. Kor Hoebe was our tour guide and we were lucky to have him. He was hilarious, relatable, honest, and ridiculous--and we loved every minute of the tour. I even found him on YouTube a few days later :) 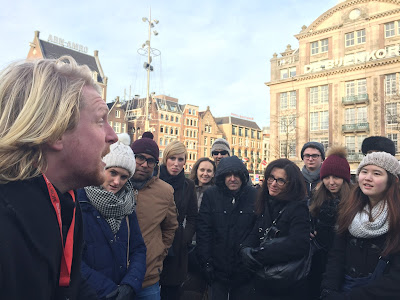 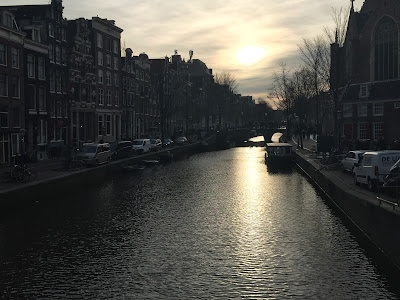 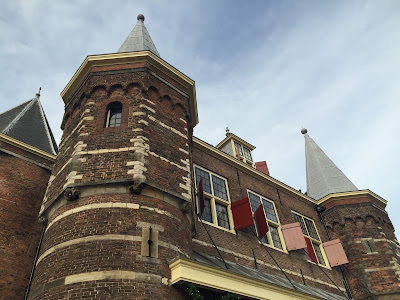 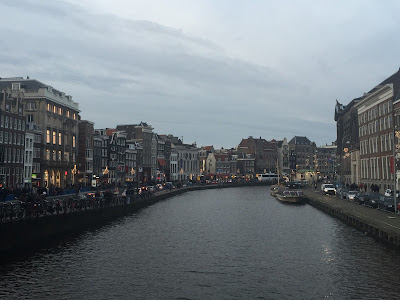 Amsterdam has always been a liberal place--first to legalize gay marriage, tolerant of drugs and sex. One of prominent indications of this is the Homomonument, to commemorate the gay rights movement in the Netherlands. There are 3 triangles--one points to the war memorial in Dam Square, one points to the headquarters of the gay rights movement, and the final triangle points to Anne Frank's house. Our tour ended nearby, so it seemed fitting to walk over to Anne Frank's house next. 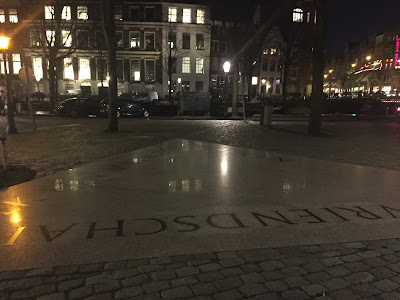 Though we didn't go in the museum (lines to get in were 3+ hours long during the days we were in town), it was important to me to see Anne Frank's house. Fitting because we had also seen Auschwitz on this trip, but also because I had a chance to portray Anne Frank in a play during my sophomore year of high school. Seeing the house was something I am very glad we took the time to do. 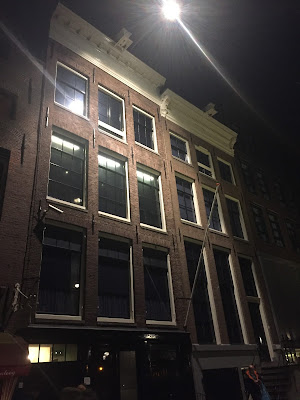 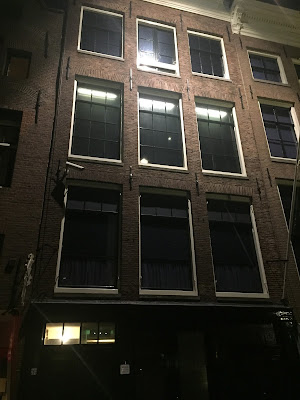 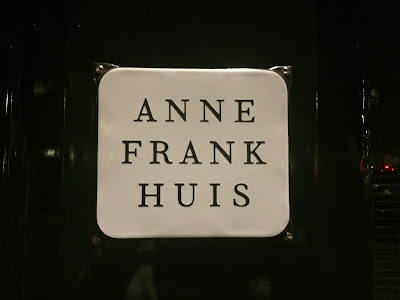 It was fairly late by this point, and we had done a ton of walking. We stopped at La Place for dinner, after seeing all of the great food they offered during our break on the walking tour. We opted for curry noodle bowls, which were pretty outstanding! 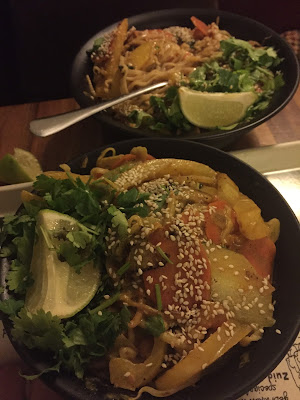 After that, it was back to the hotel and a good night's sleep! 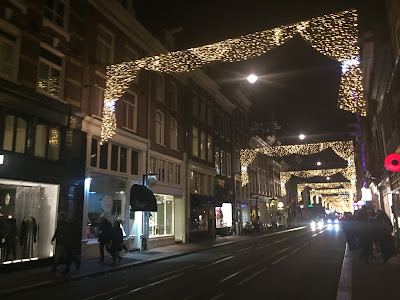 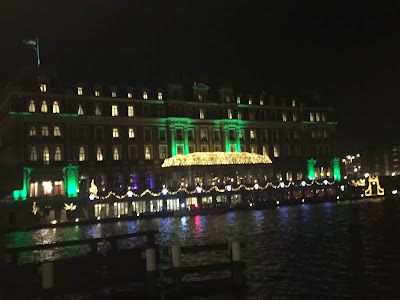 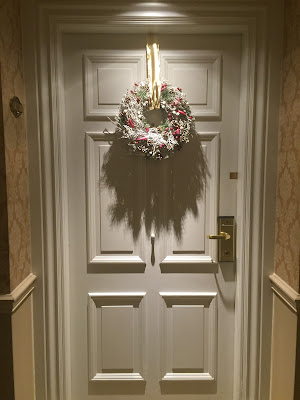