When we last left you, we were off to Chiang Mai airport in the wee hours of the morning. Our flight to Krabi was at 6am, so instead of sleeping for three hours in a hotel and heading to the airport, we decided to pick up our backpacks and venture that way immediately after the NYE celebrations.

How did we get to the airport? You guessed it. We walked! We arrived at the airport around 2:30/3am, and camped out on some padded seats for about an hour and a half until security opened. Not the best night's sleep, but it was a free night's sleep.

We were on another Air Asia flight to Krabi, a southern beach destination on the west coast of Thailand, on the Andaman Sea. Rick and I both managed to sleep for the whole flight, and before we knew it, we had arrived.

In keeping with the other Air Asia flights we had been on, we had to board a small bus to take us to the terminal. Usually, this is a 2 to 5 minute drive, but at the Krabi airport, we drove for approximately 15 seconds, and then the bus stopped. It took us longer to load than drive! Not idea why we couldn't just walk that 500 ft....

Rick had pre-booked a taxi from the airport to our hotel. The driver was late, so Rick missed out on his dream of having a person holding a sign with his name at the terminal exit. We had about a 30-45 minute drive to Ao Nang, the beach where we would be staying in Krabi. The topography of the area was totally new to us, and different than anything we'd seen so far on the trip. Huge cliffs of light colored rock, covered in jungle vegetation, were everywhere. 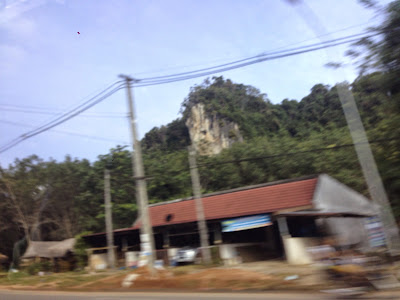 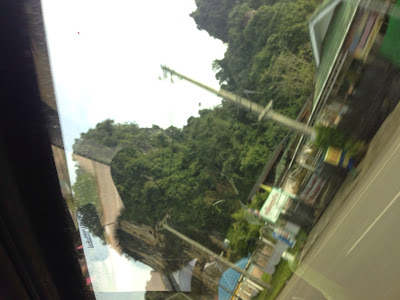 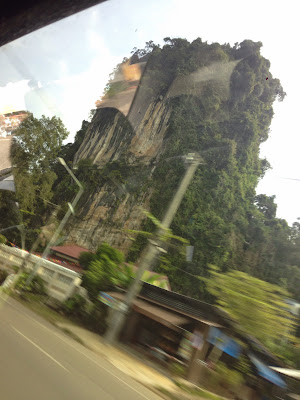 When we arrived at our hotel, our room was not yet ready. We left our bags with the front desk and wandered down the main street toward the beach. We passed a McDonalds on the way, which gave me a chance to snap a quick pic of a phenomenon we'd noticed at the Asian McDonalds chains we had passed--Ronald McDonald, with his hand pressed together in a wai. How very culturally aware of you, MickeyD's. 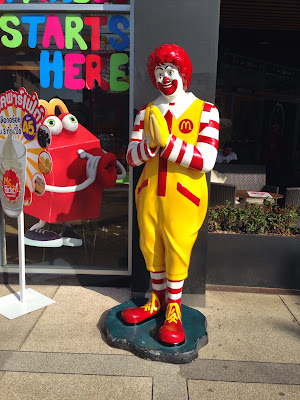 Down at the beach, there are long tail boat services available. There are private boat rentals, but also shuttle-type services that travel to various other beaches and islands. We checked out the prices for later, and continued to explore the beachfront. 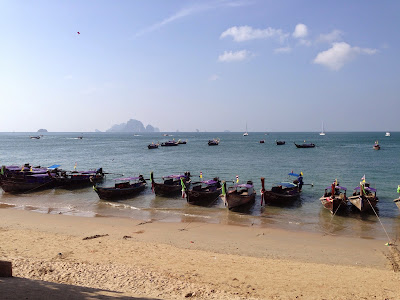 Along the water are a number of resorts, restaurants, and massage stands. Golden Beach Resort had a spa as a part of their resort, and offered 50% off massages between 10am and 2pm......ummm, sign me up! We still had time to waste before our room was ready, so Rick got a back and shoulder massage while I had a killer Thai massage. The sight of the water and sound of the waves was amazing. 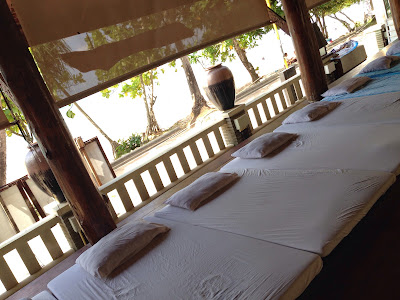 We wandered back up to our hotel and got in to our room--this hotel was a hotels.com booking, but was nice enough. The room was spacious and had a balcony. The only strange part was the lack of shower--we had a tub and a shower head, but no curtain. Sitting showers it was! 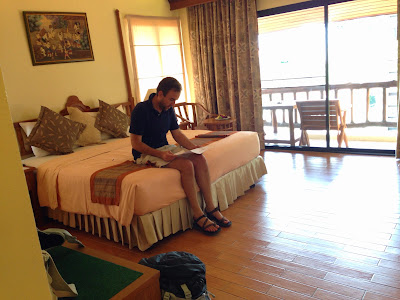 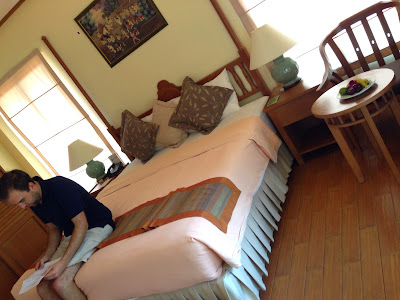 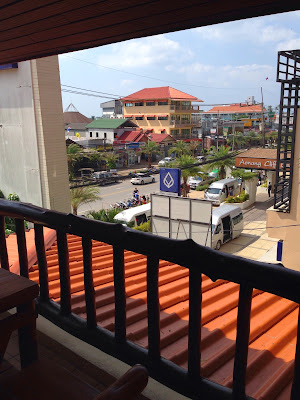 After changing into our swim gear, it was time for lunch. Most of the vegan/vegetarian restaurants in Krabi are closer to the main city, away from the beach. Luckily, we happened upon Tandoori Nights, on the main street. They had Indian and Thai food, and were offering 20% off of food. 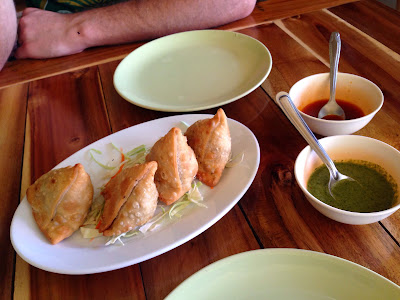 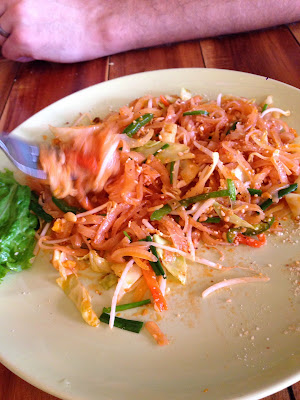 The beach was our next stop after lunch. We got on to one of the long tail boats and headed over to West Railay Beach. The ride was fun, seeing all of the outlying islands.

The beaches are absolutely stunning--the cliffs and jungle come right up to the water, which is warm and bright blue. Rick and I both decided it was the most beautiful beach we've ever been to. 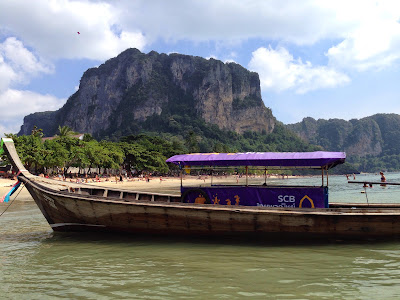 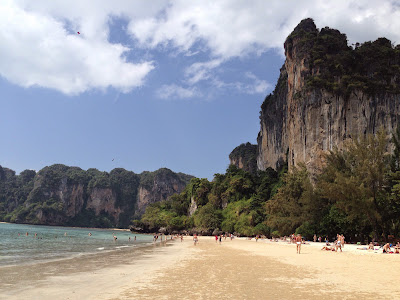 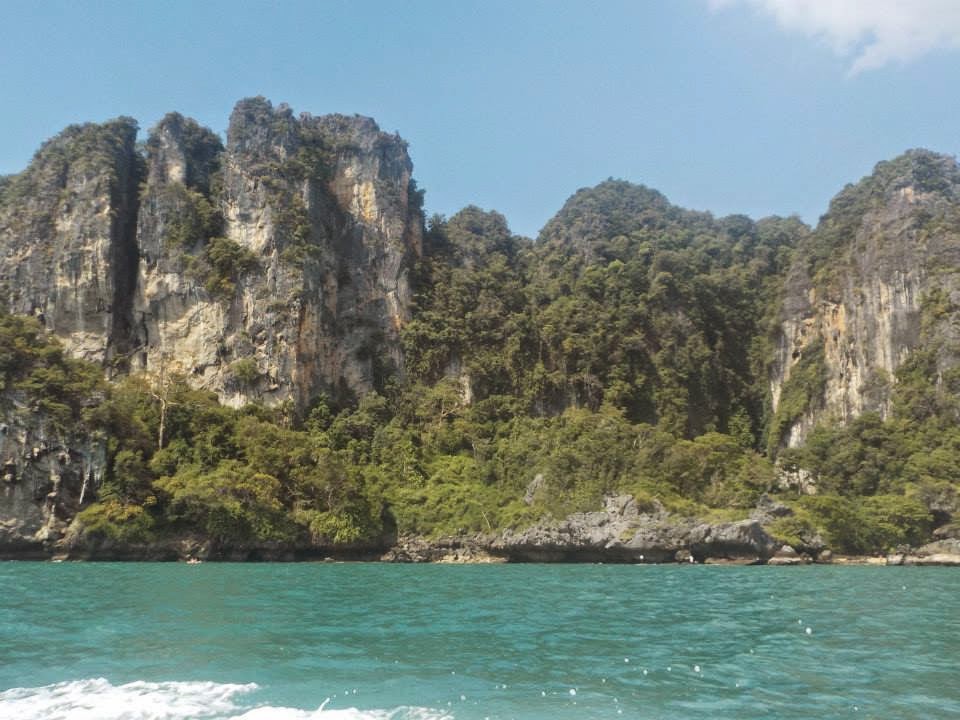 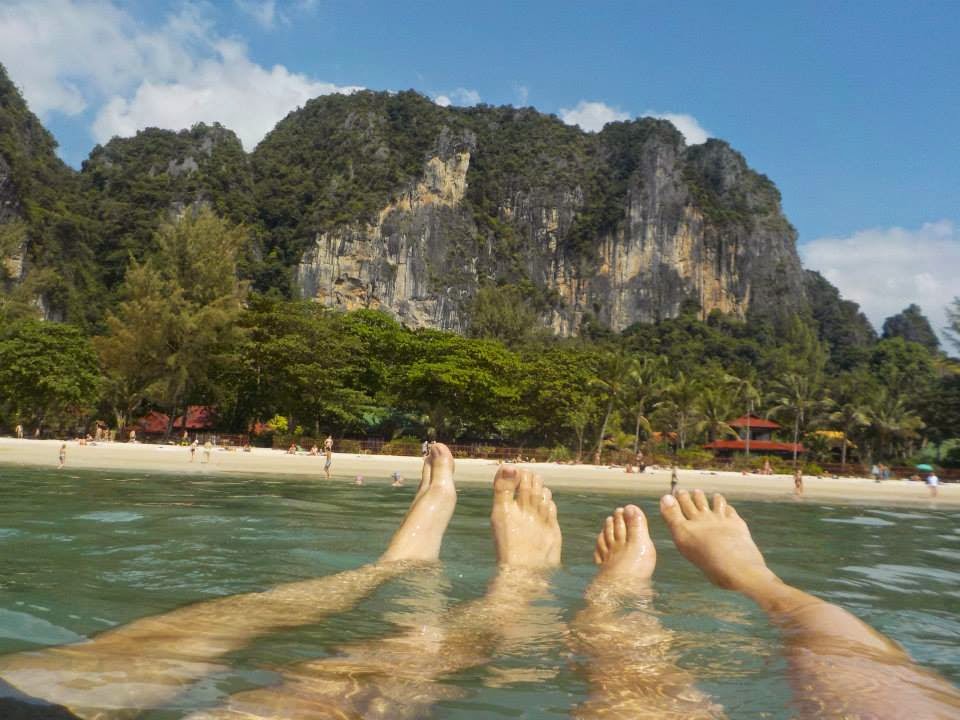 We swam for a while and wandered through the walking market in West Railay. It is easy to walk to East Railay, so we joined the procession of tourists headed that way. At some point, we began to notice a fair amount of litter strewn about. It was surprising, because I can't imagine tourists just leaving their garbage everywhere. And then it all made sense. 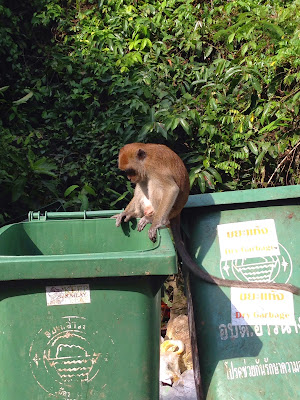 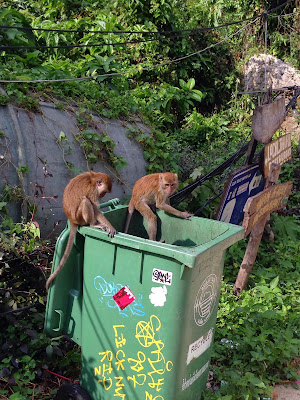 Bunches of little monkey friends were in and out of the trash, scavenging! We continued our walk over to East Railay, and were a bit surprised by what was there--no beaches to lay out on or walk on, just lots of bars and restaurants and hotels with sort of terrible beachfront views. It was a little depressing! With the tide out, everything looked very desolate (and I'm sorry I forgot to take a picture!)

We walked some more, heading for Phra Nang Cave Beach. There were even more monkeys along the way, who seemed totally unfazed by all of the human attention they were receiving. Phra Nang is impressive--the cliffs come right up to the water, and I couldn't fit the whole thing into one shot with my camera. We swam a bit more here, enjoying the views of the caves and cliffs. 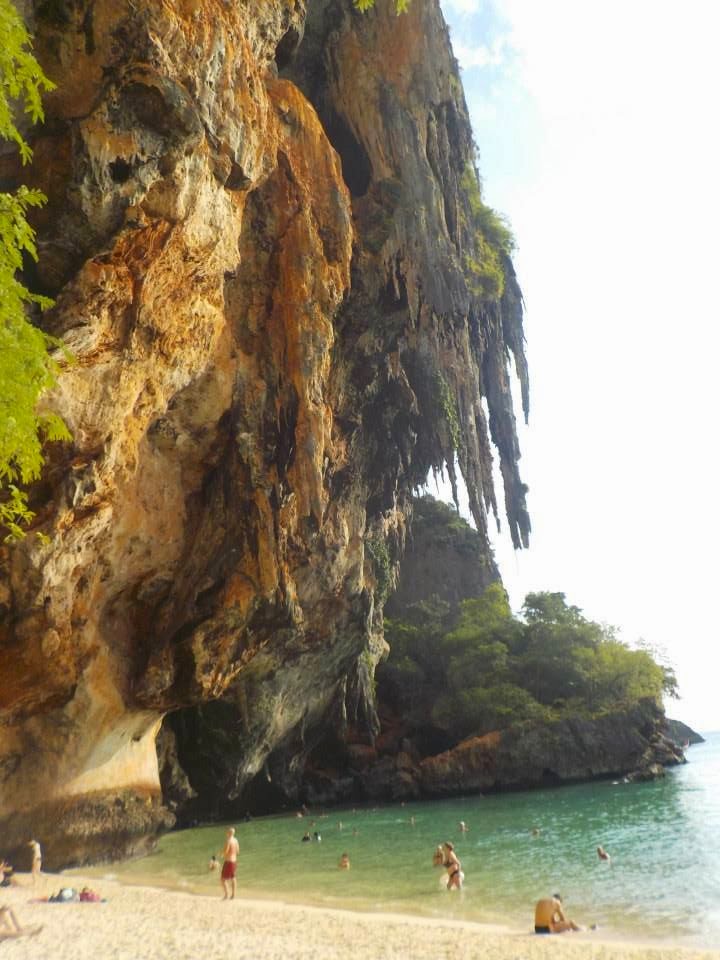 We took the boat back over to Ao Nang and headed back to the hotel to change. Rick wanted to check out the beach front in the opposite direction, so we headed off. We were pretty exhausted by this point, since we had gotten so little sleep and just really wanted dinner. We checked out a number of restaurants and actually sat down at one that had Pimms on the menu, but when no one came over to bring us menus or say hello, we got up and left. We ended up back at Tandoori Nights for more Indian food. 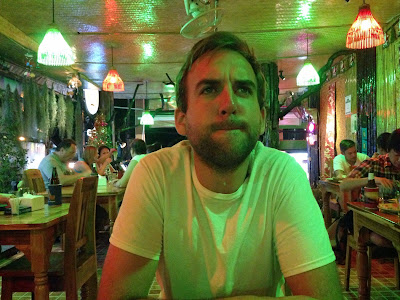 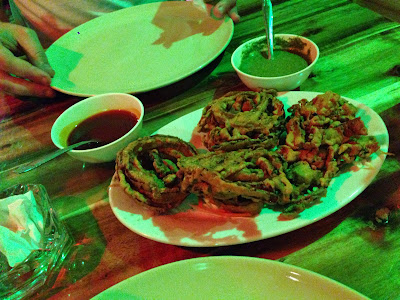 We stopped in a few little convenience stores to check out the snacks. Ended up buying some chips and a huge bottle of water, which was a very welcome sight! We fell asleep fairly early--it had been a long day!