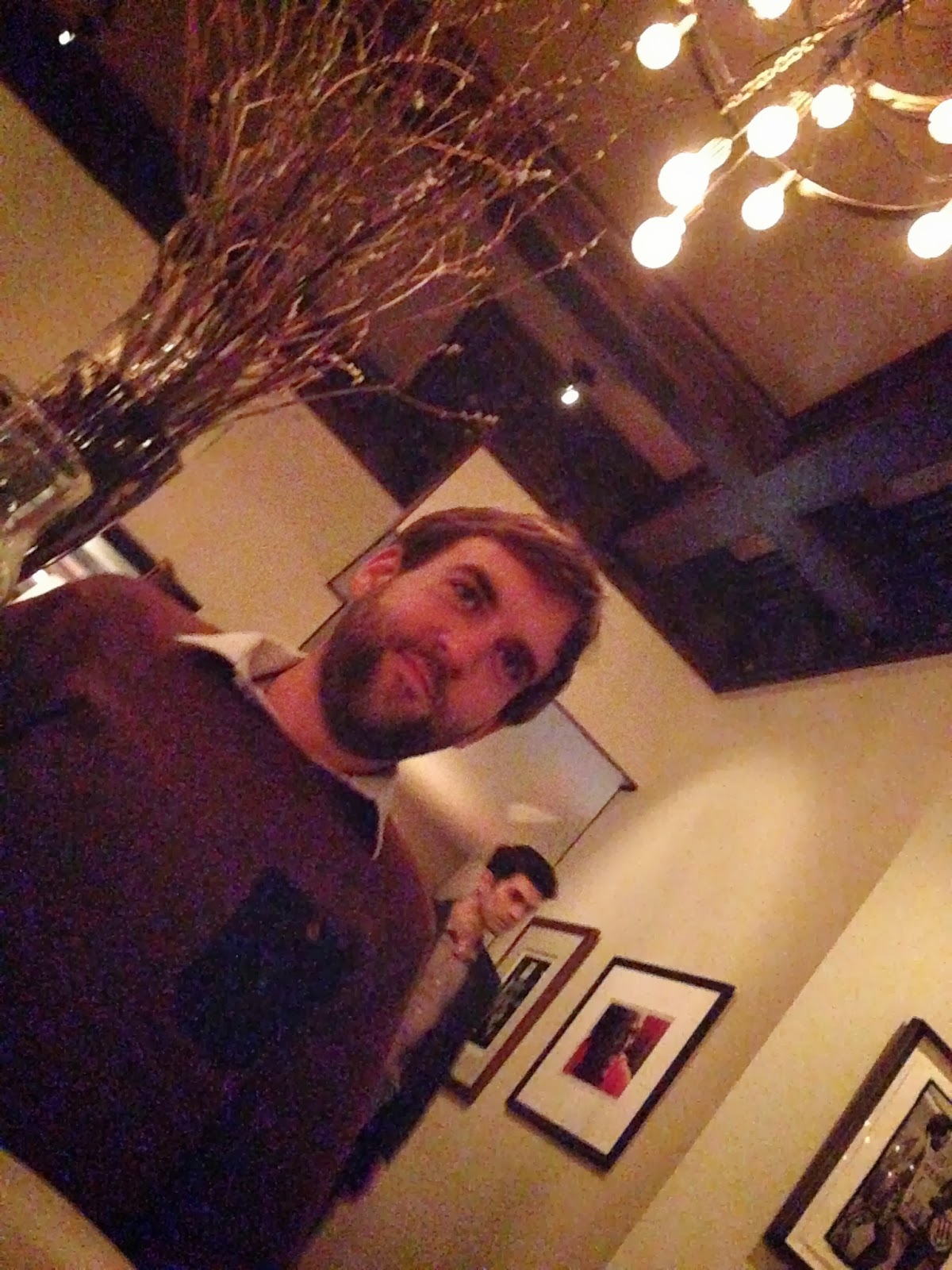 When Rick and I first read about Crossroads in our LA Magazine, we immediately knew it was on our short list of new restaurants to try. After checking out the menu, we realized it would be the perfect place to celebrate our marriage with a special meal to ourselves. It took a few weeks for us to get there, since we needed to have a reservation on an evening we had free, and Saturday night was the finally the perfect night!

Dinner was late, with our reservation scheduled for 8:30. We did not use the restaurant's valet parking and ended up finding a spot in the neighborhood. Even looking through the windows of the restaurant, we were immediately blown away by the decor and beautiful exposed bulb chandeliers throughout the restaurant space. We had to wait a few minutes, but passed the time by celeb watching as Tisha Campell-Martin's birthday party got underway. You know a restaurant must be good if Don Cheadle is there! 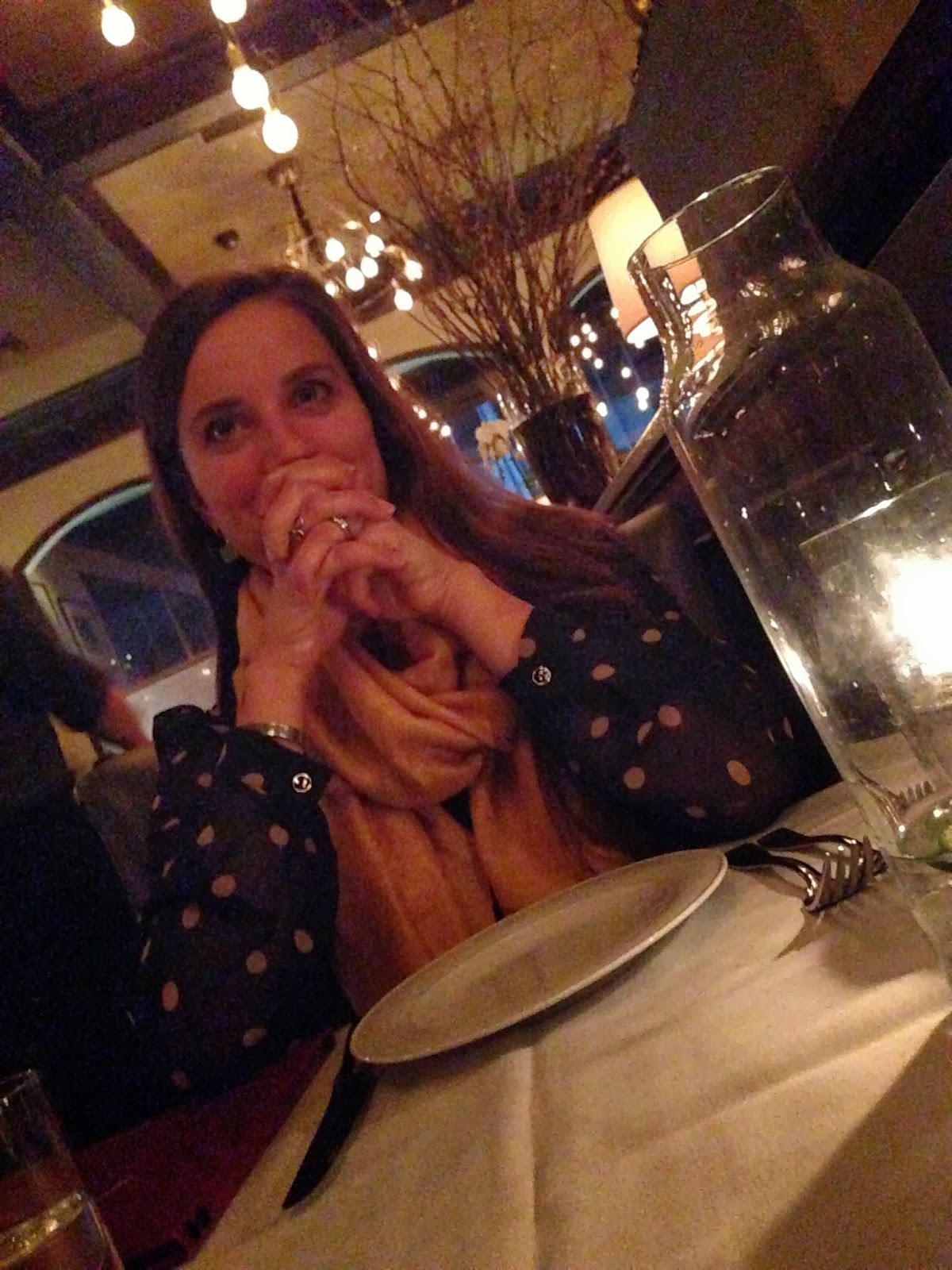 Once seated, we started to make our game plan--whenever we eat out, we tend to share our meals with each other and order different things, but because Crossroads serves tapas-style small plates, this made the selection process easy. We ordered drinks and appetizers first. Rick had a New York Flip (buffalo trace bourbon / 10 yr tawny port / coconut cream / "egg yolk" / nutmeg) and I ordered the Lady from Shanghai (mahia fig spirit / goslings rum / lemon / autumn syrup / apple kombucha / cinnamon). Let's be honest - the prospect of kombucha in a cocktail was just too enticing to pass up!

Emily's cocktail review: My cocktail got better as it "aged." The flavors melded together even more, and it was the perfect choice for fall.

To start, we ordered the Kale Caesar salad and Kite Hill Cheese Plate. Whenever we see an option for a cheese plate, we give it a try after having an incredible experience at Watercourse Foods in Denver...but that's a story for another day! The plates were small, but flavorful. The salad had small croutons and a distinct lemony yet cheesy flavor and the cheese plate came with some flavorful soft crackers, cranberry jam, peanuts, flowers, and raisins. Our cheese flavors were dill truffle, sun dried tomato, and a brie. 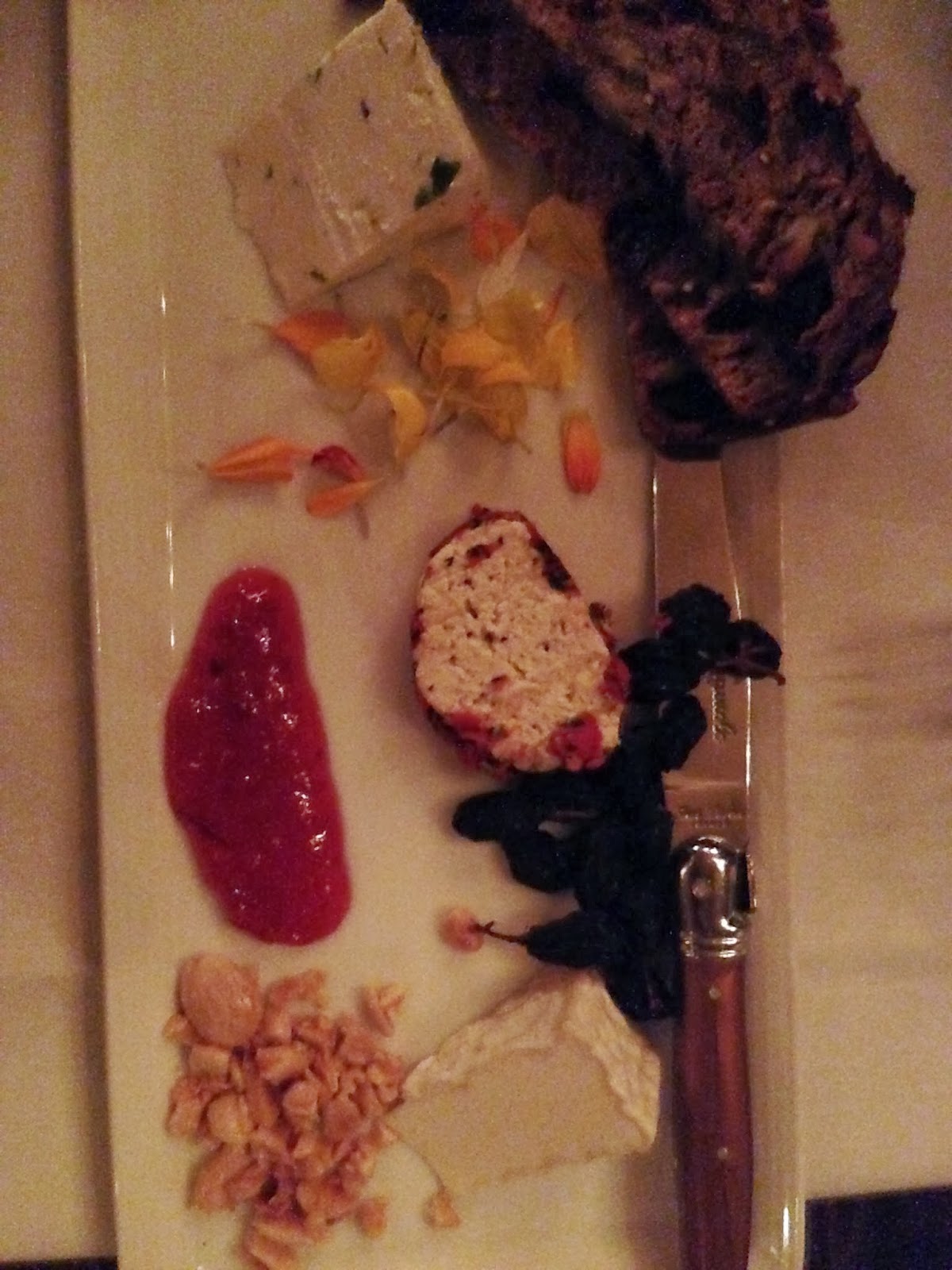 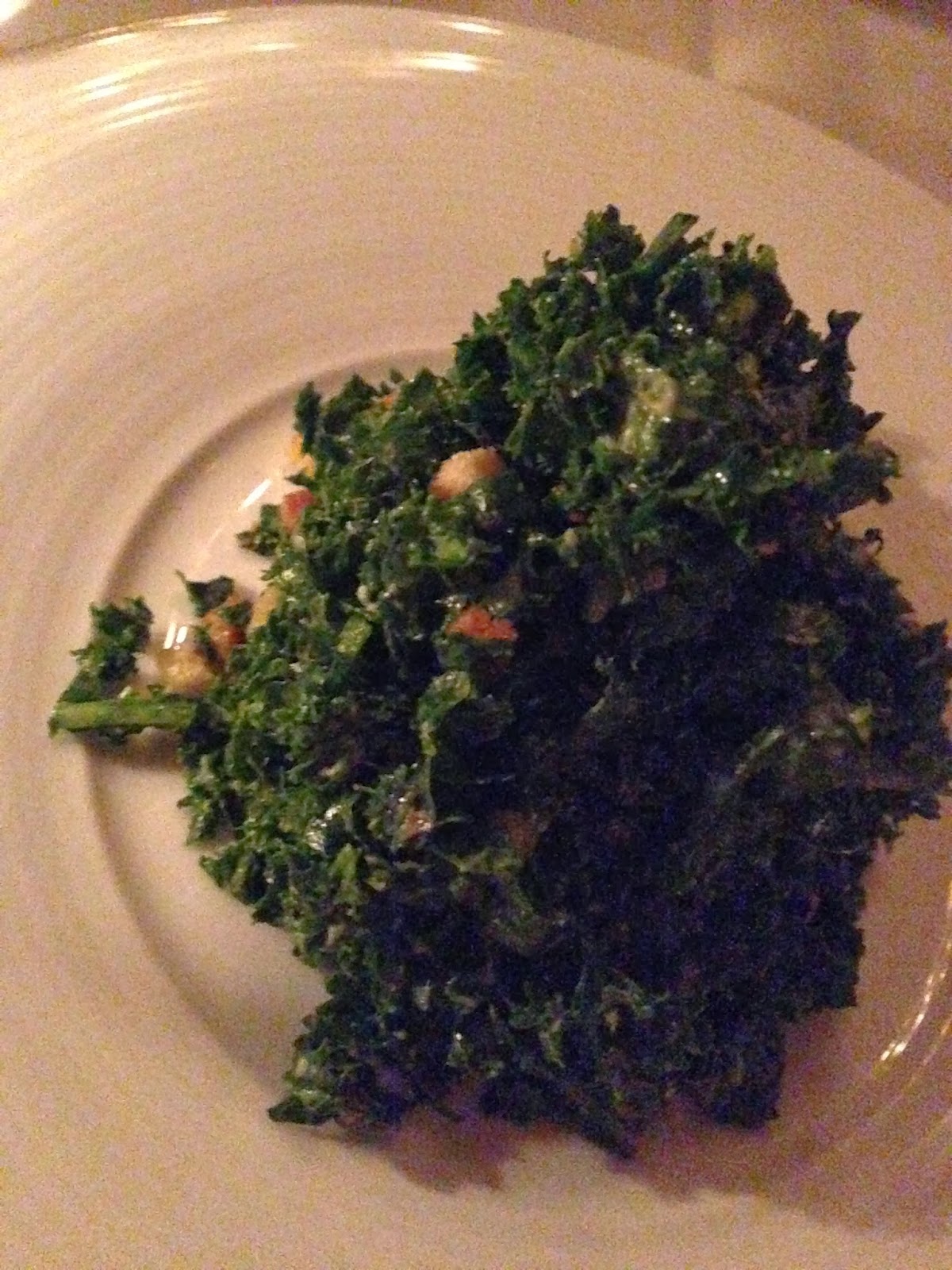 Emily's starter review: The kale salad was great. The flavors were very layered, and it was a great way to start the meal. My favorite cheese was the dill truffle, followed closely by the brie. The texture of the cheeses was very unique to me--instead of a thick, rich feeling like the nut cheeses I've had in the past, these had more of a gelatin-like lightness to them. I would be curious to know what they are made out of. Pretty delicious, but Watercourse still wins :)

For our main course, we ordered the Artichoke Oysters, the "Crab Cakes," the Baby Kale and Artichoke Dip, the Wood-Fired Meaty Lasagna, and the chef's special, a pumpkin ravioli. The dip was a last minute addition, as our original choice of Kale Spanakopita was sold out for the night--boy, was that a happy coincidence!

We started with the oysters. I'm sorry that most of my photos are dim and a bit orange--that's what iPhone gets you in low light, I guess! For a better photo of the oysters, check out the LA mag article linked above. Rick had never had oysters in his pre-vegan days, but I was definitely a fan. I was curious to see how these plant based ones would be, and I was immediately blown away. The "oyster" is a fried oyster mushroom, on top of an artichoke puree with kelp caviar. It was one of those times where we took a bite and just started laughing because the food was so good. 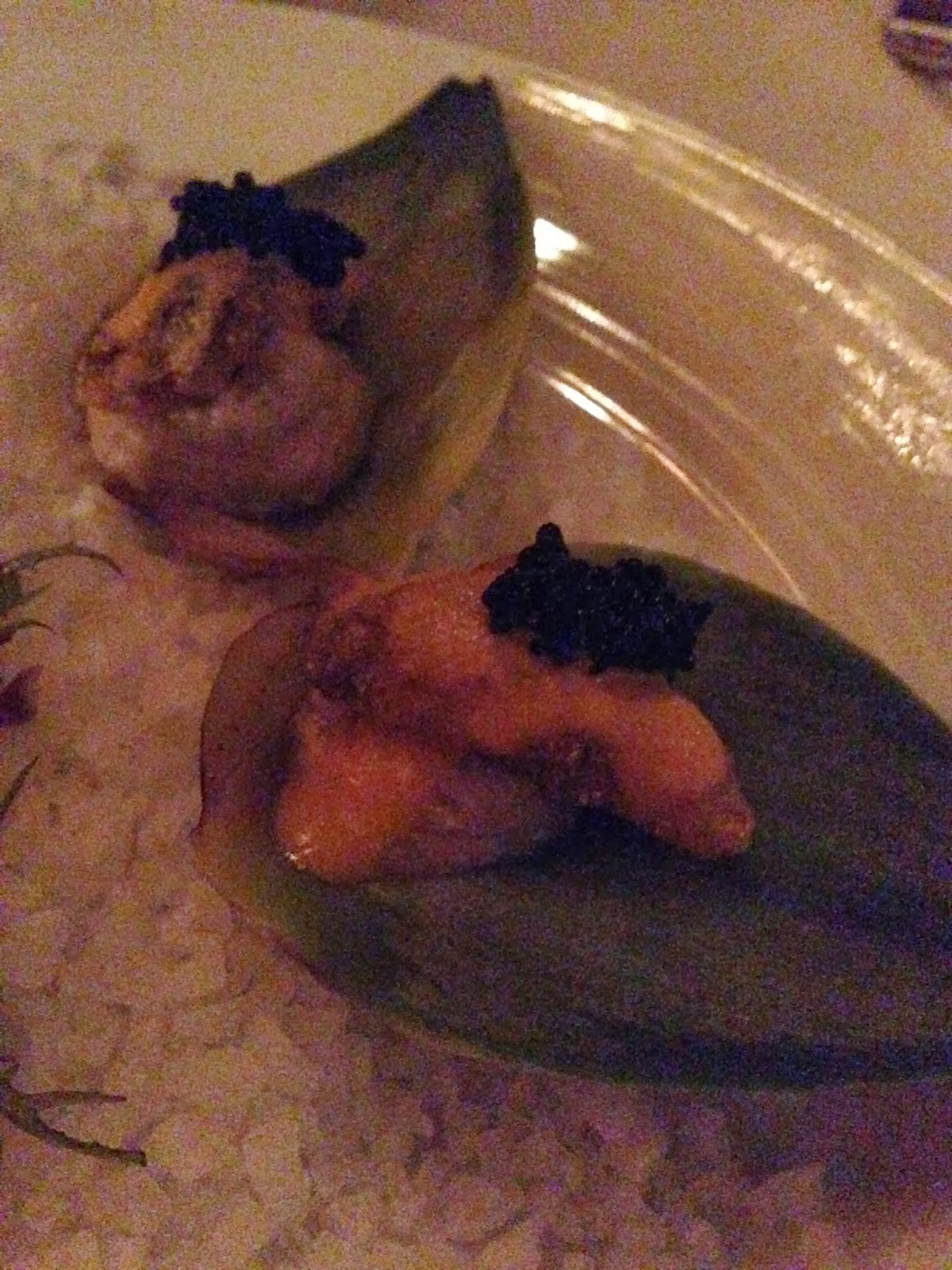 Next up were the crab cakes. They were a perfect blend of savory and zippy, with some horseradish cream drizzled on top.  The flavors were perfect--and I even enjoyed the beets on the top! 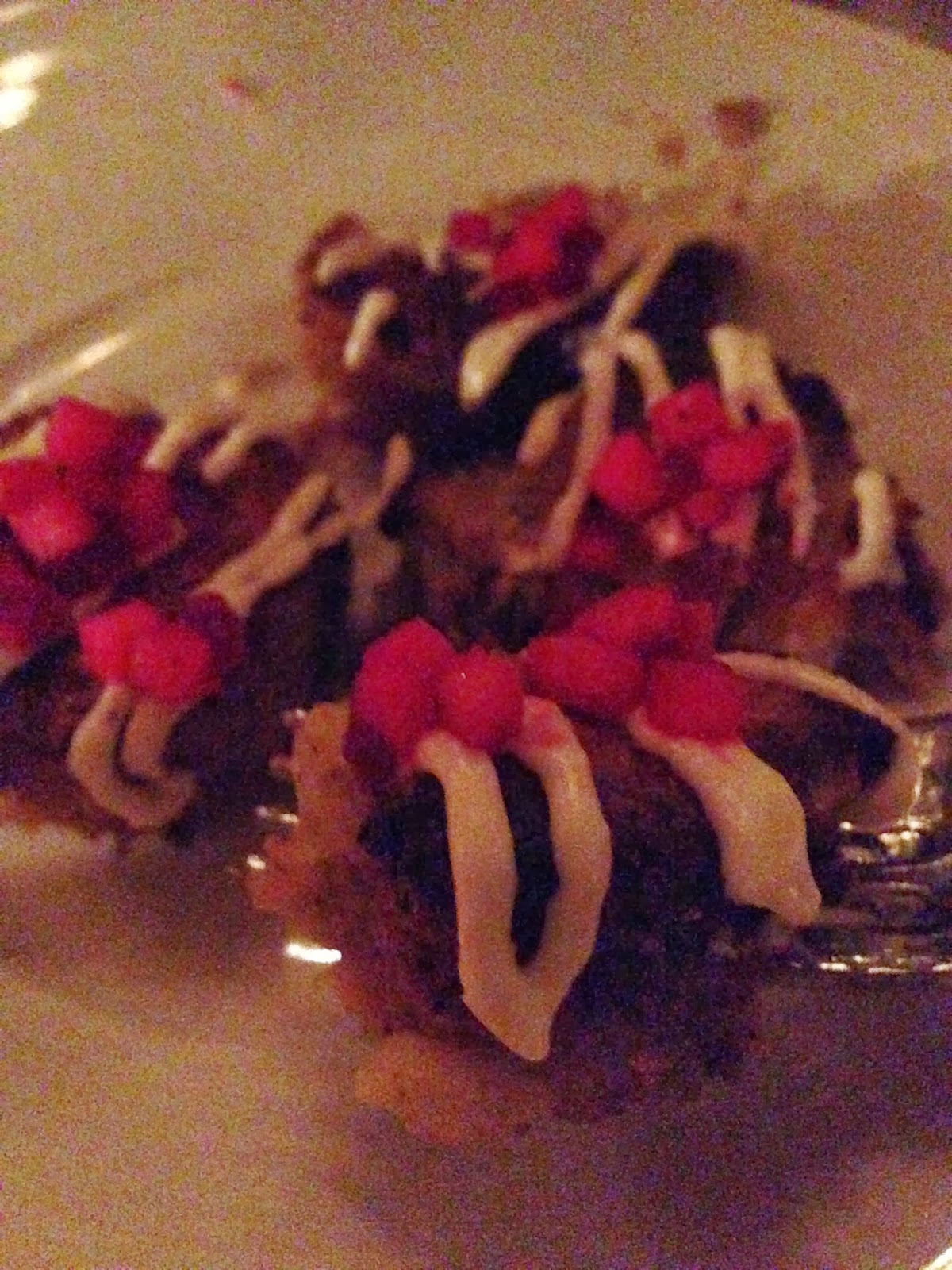 Due a happy twist of fate, we ordered the kale artichoke dip--I had suggested it initially, but Rick wanted to hold off because of the artichoke oysters. Luckily, our server suggested it when another selection was out and man oh man were we happy! The dip was creamy and rich, and was even better than I remember the mayo-filled version had been. It was filling and a perfect pairing with the lavash crackers. I think this was Rick's favorite of the evening by far. 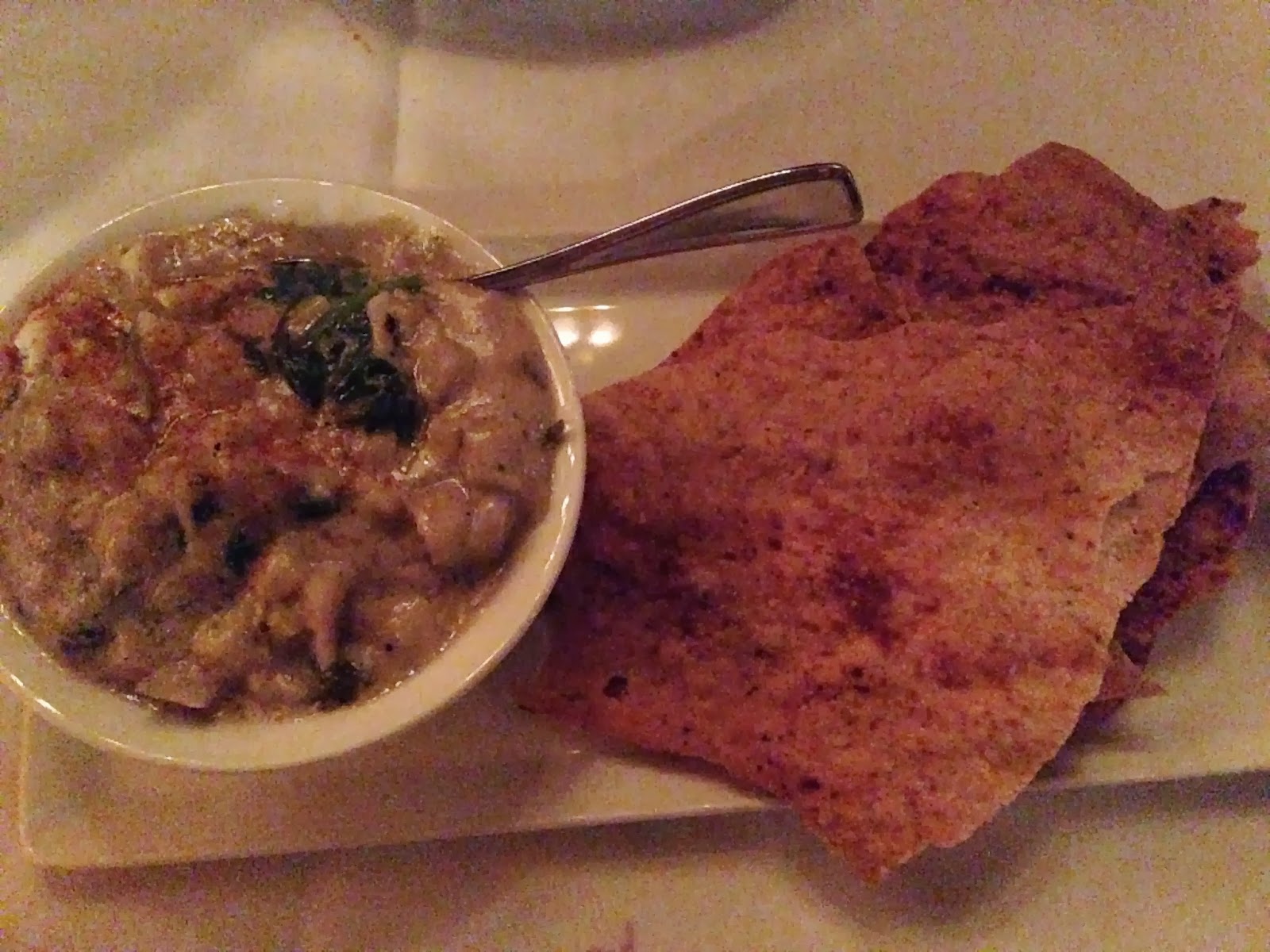 The lasagna was light and flavorful. The "ricotta" inside had that same lightness as the cheeses in our appetizer, and the noodles were perfectly done. Although the lasagna I make is pretty good, this one was outstanding. It was balanced, but not too dense. Delicious. 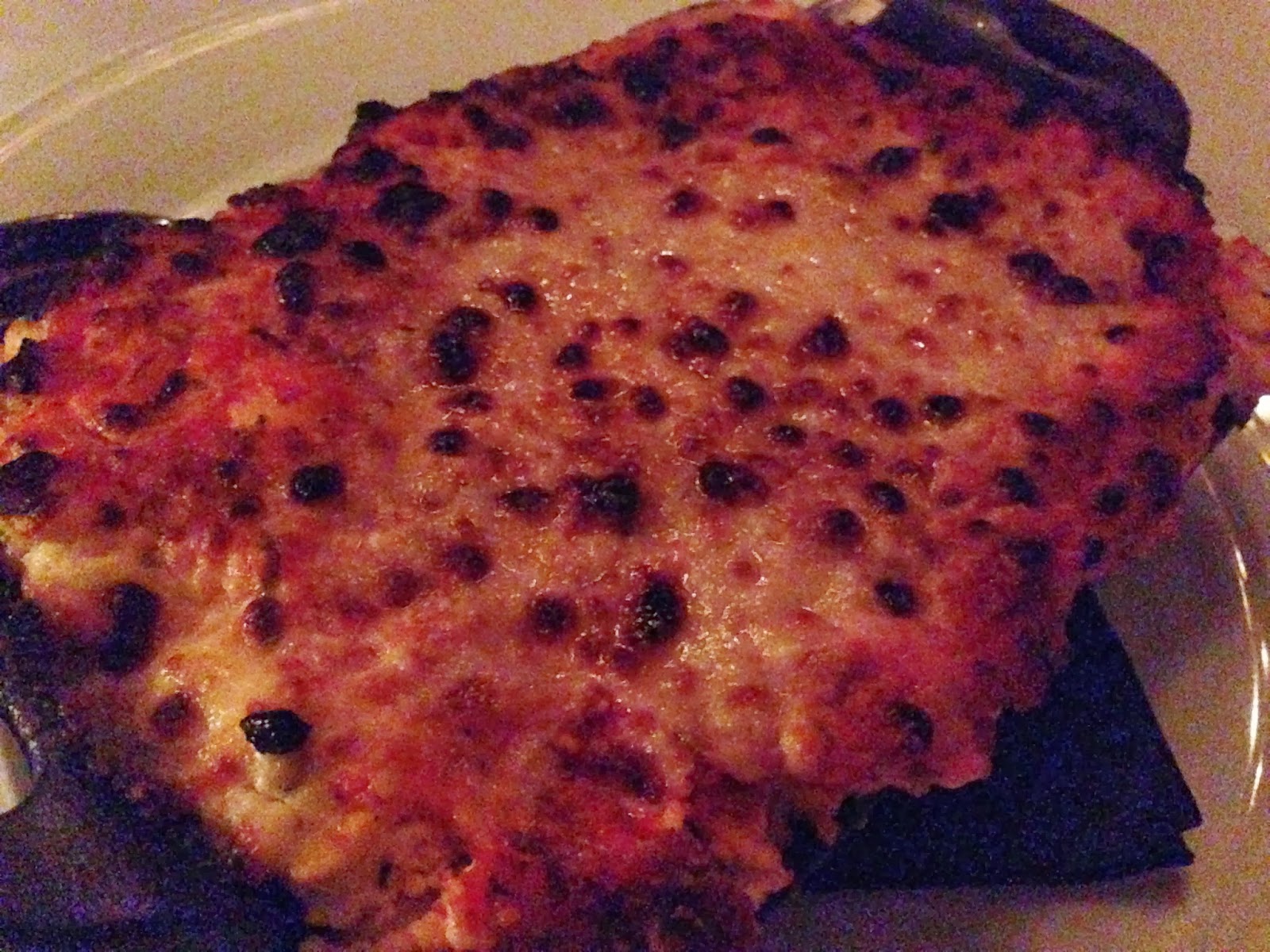 Our last entree was the chef's pumpkin ravioli, with toasted walnuts and a sage garlic butter sauce. In a season so infused with that fake, overly pumpkiny flavor, this ravioli was subtle and complex. The butter sauce was incredible, and the walnuts were the perfect compliment to the pasta. 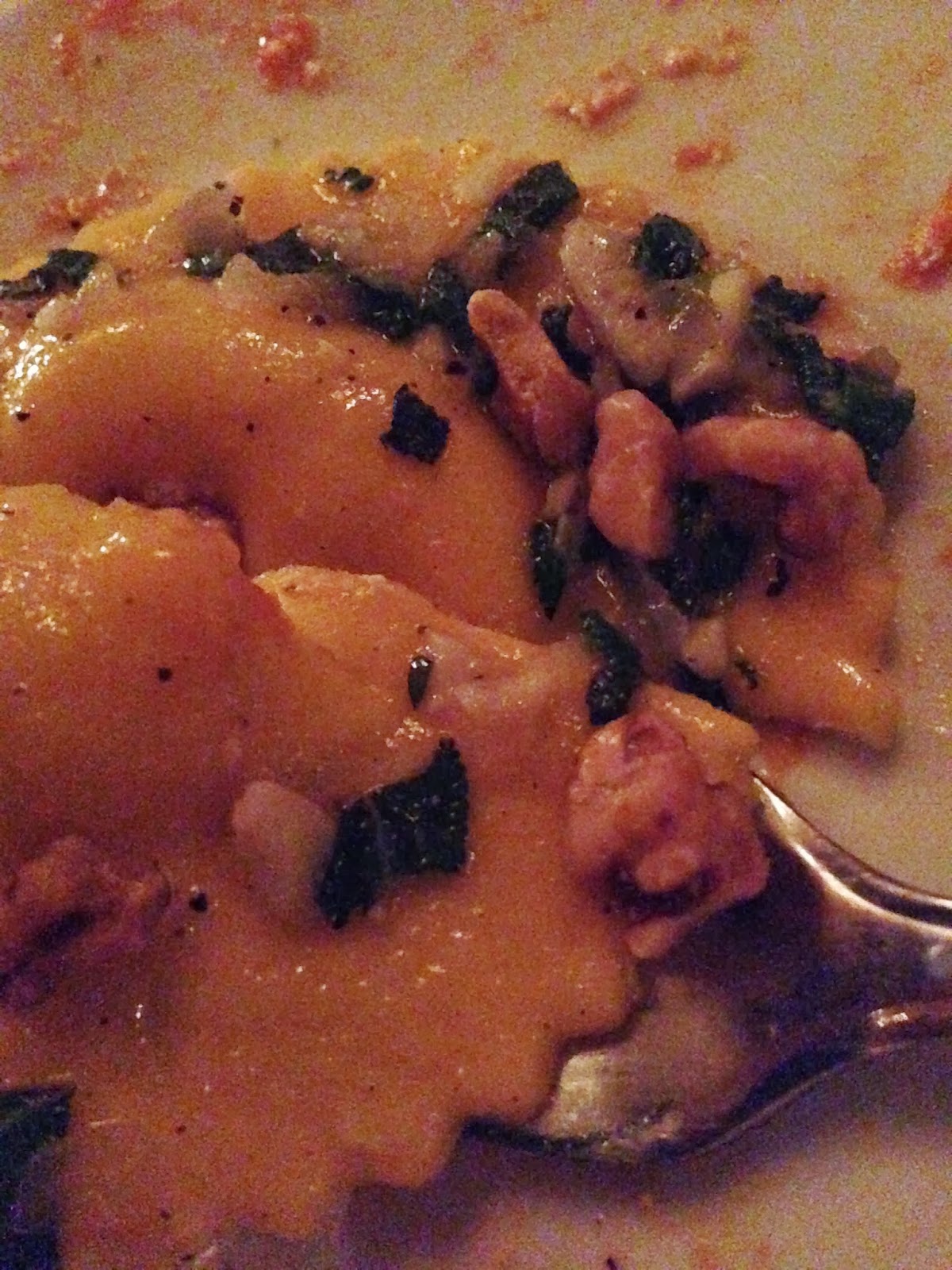 Rick's entree review: Surprisingly, the best dish of the night was the dish that I wasn't originally going to order, the Kale Artichoke Dip.  We were going to get the Spanakopita but they ran out, thankfully, and we ordered the dip.  It will easily be my first dish I order next time; after we save up enough money to do it again.
Emily's entree review: I felt like each dish was more and more impressive. All of the layers of flavor and indulgent ingredients made everything special. The artichoke oysters were easily my favorite--I could have eaten those over and over again. The pumpkin ravioli was delicious as well, and can't forget the artichoke dip. Okay. I guess everything was amazing. 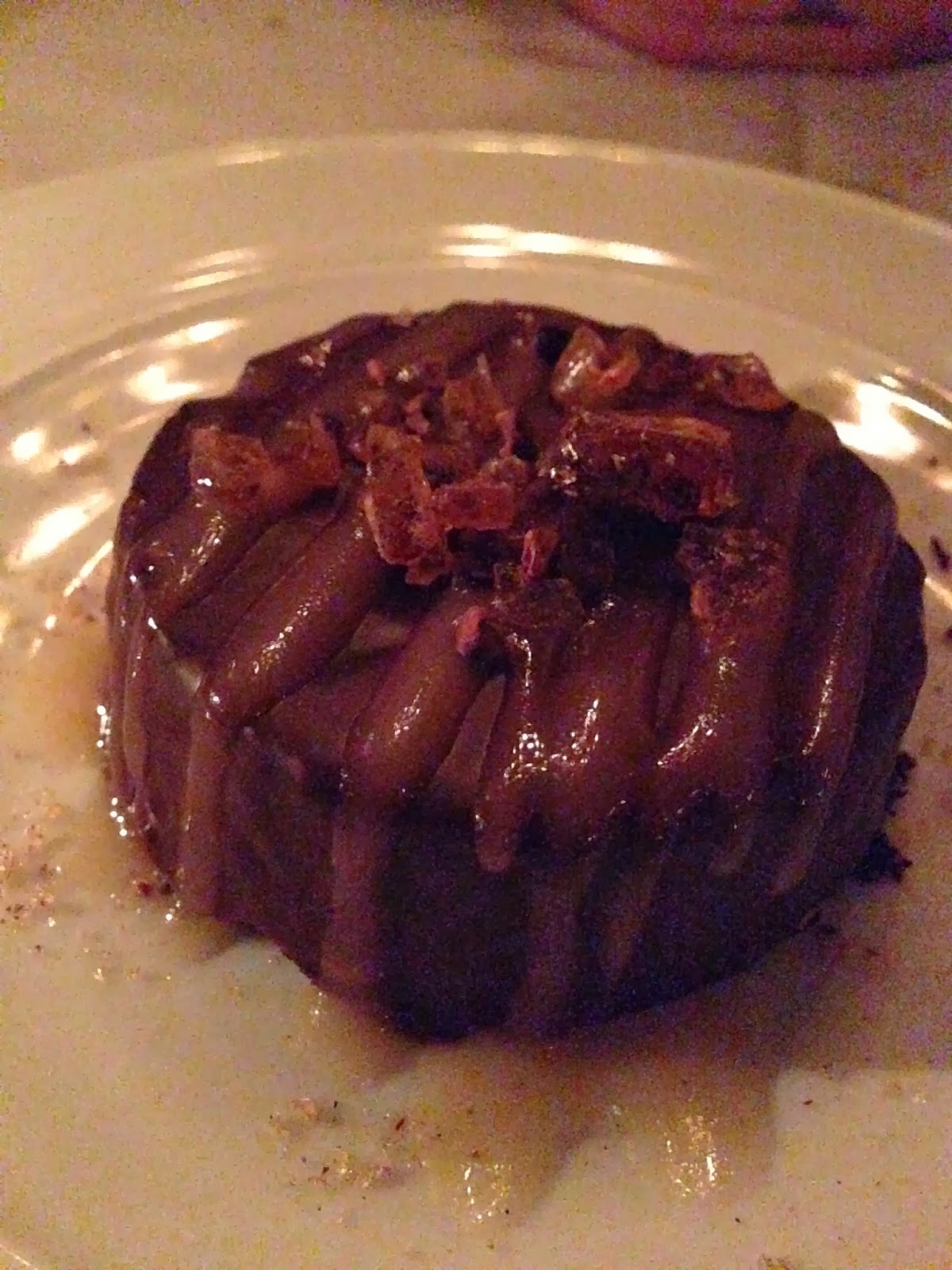 Our dessert was the Chocolate Indulgence, which is a dark chocolate cake with cocoa nob pralines and a hard cider sauce. The middle had a chocolate ganache, which was probably the best part of the cake!

Rick's dessert review: Still delicious, but unfortunately I think we expected more.  I typically pick the right dessert for us.....should have gone with the pumpkin tiramisu.  Oh well, next time.
Emily's dessert review: This was probably the most disappointing dish, which is of course relative because it was still delicious! It was the only thing we ate that I felt I would had switched for something else.

We dined at - Crossroads Kitchen

Unexpected perk - Celeb sightings :) and laughing out load because the food is ridiculously amazing.

We hoped you enjoyed sharing this experience with us! Crossroads is definitely a must for any vegan diner in LA! A special thanks to the Takeda family for their generous wedding gift, which was earmarked for a "nice vegan meal." I think we definitely had an AMAZING vegan meal!