Monday was an early morning for us--our train to Brussels was leaving at 8:04am, and we needed to be to St. Pancras an hour early. We decided to get up early, head to the Tube station to get our Oyster cards, go back to the hotel for breakfast, and then catch a 6:40ish train to the international terminal. Great views of the Tower as the morning sun was coming up. 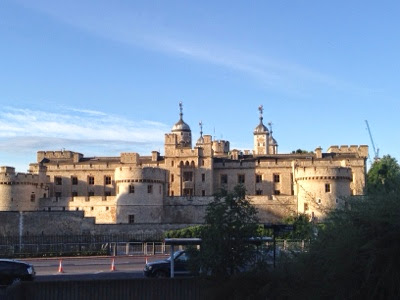 We took Eurostar from St. Pancras, a very easy process. You scan your ticket, go through a metal detector, have your bag x-rayed, and then get your passport stamped, saying that you are leaving London. Boarding occurs 20 minutes before your train is scheduled to depart.

Some of you may have heard about the delays through the Channel (Chunnel) Tunnel yesterday--a train broke down about 7 miles in to the 30 mile tunnel, and that train had to be evacuated. We ended up sitting at a train station south of London for 2 hours, and then another 40 minutes in the queue to go in to the tunnel--in all, a three hour delay. Luckily, we slept through most of it!

This was our "before" photo--back when we thought the trip would only take two hours..... 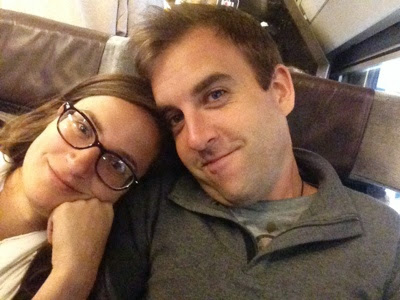 We got to Brussels around 2pm, and walked to our hotel. We are at the Radisson Blu Royal property on this leg of the journey.

We spent the afternoon wandering around the city center. We saw the Grand Place, Manneken Pis, the Musical Instrument Museum, and lots of beautiful architecture. 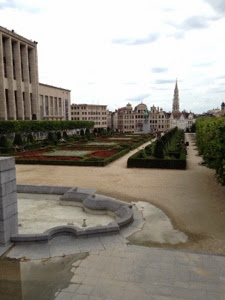 There are tons of restaurants very close to each other right near our hotel, seemingly organized by country of origin/cuisine. We stopped for falafel in the Greek section (our first of the night....) 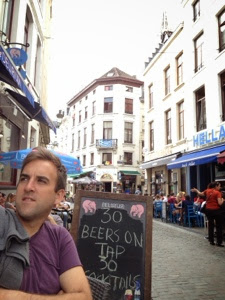 Somewhere along the way, we noticed tons of people with Belgium flags and gear all headed the same way. We were wandering the same direction, and ended up in front of the Royal Palace, where the Belgium football team was being welcomed home from Brasil and the World Cup. I don't know if I can accurately put in to words how crazy it was--every person with some sort of spirit wear, loud music, cheering, signs, and tv cameras. You'll have to ask Rick what it all looked like--I was too short to see! It wasn't until I saw the newspaper this morning that I even knew the players were wearing suits! Footage of the crowds at the rally was on the news last night, and we tried to find ourselves. It was nuts :) 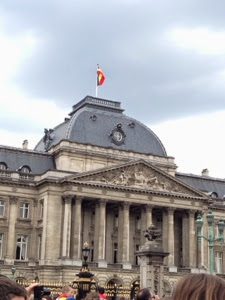 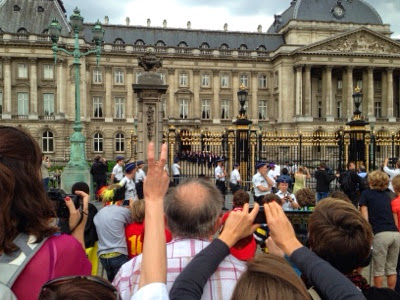 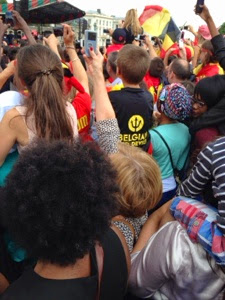 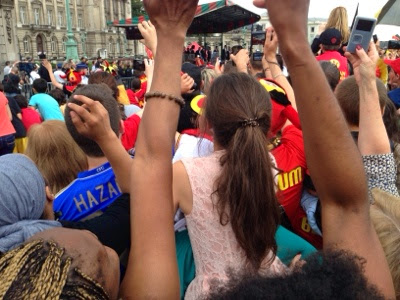 These were in the window at a Belgian chocolate shop--very fitting! :) 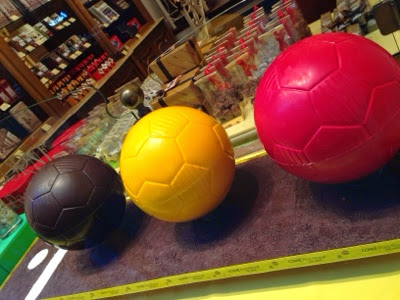 Manneken Pis is probably one of the most notable landmarks in Brussels, despite its size. I'll let you wiki that one for yourself! It was fascinating to see the huge crowds around it, filling the street.

We went back through the Grand Place, and stopped for beer. One of my goals for this part of the trip was to drink delicious Belgian beer and eat fries, a delicacy here, though usually served with mussels. Delirium beer is brewed near here, and has its own chain of pubs. We had fun sampling a number of great beers. I tried Delirium's Cherry beer (which had a flavor that reminded me of the cherry chewable kids multivitamin) and an apple beer that smelled exactly like the Quaker Oats apples and cinnamon oatmeal you make in the microwave. Both were delicious! Rick tried the Tremens and an IPA.

We were hungry again at this point (ahh, the joys of walking so much) and stopped fo another falafel pita, from a different Greek place-Rick got some olives, too. Then, we shared a sampler of three other local favorites from a smaller Delirium cafe. 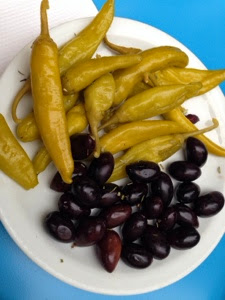 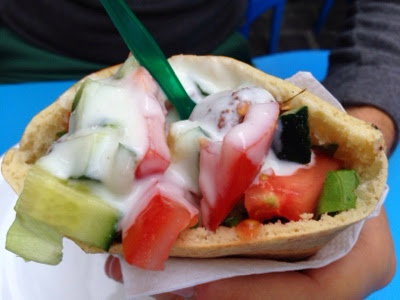 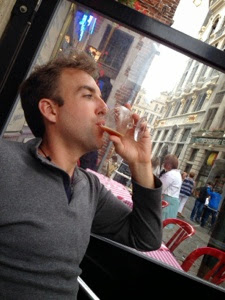 Finally it was back to the hotel to relax and get some rest. We were waiting until dark to go see the Grand Place lit up at night, but only one of us made it that long....not me! Rick said it was beautiful.

On to Gent on Tuesday!